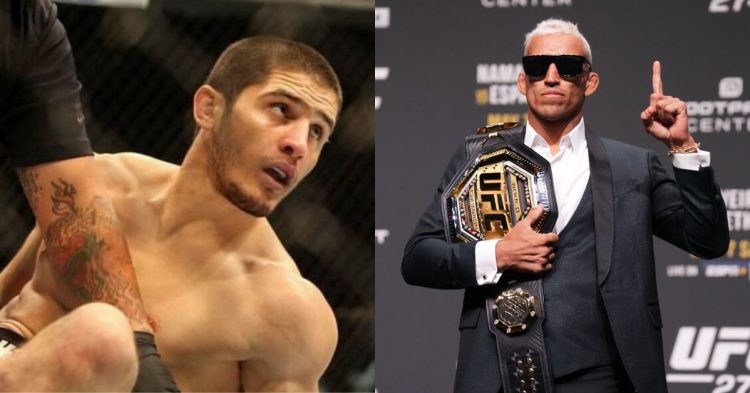 Islam Makhachev has only lost once in his entire MMA career. Adriano Martins was the man that knocked him out. Javier Mendez, Khabib, and his father in the corner looked absolutely devastated, after all seeing a Dagestani wrestler getting knocked out wasn’t a common sight. Since then Makhachev has racked up ten straight victories with notable wins over Bobby Green and Dan Hooker.

Seven years after suffering that humiliating loss to Adriano Martins Islam Makhachev is all set to fight Charles Oliviera for the UFC lightweight title at UFC 280 on October 22. It’s safe to say that since that fight things have been fairly easy for Makhachev, he has found his way to fight for the title without facing any of the top 5 ranked fighters in the lightweight division. The highest-ranked fighter Makhachev has fought was number sixth Dan Hooker.

Makhachev’s former opponent and former teammate of Charles Oliviera Adriano Martin has now shared his opinions on how the main event at UFC 280 could go, he said “I see him [Makhachev] fighting more cautiously. He’s on the rise and is evolving, but still has a lot to prove. But a fight is a fight. I’ve seen so many crazy things happen in the fight world. He has a dangerous style and is no fool on the ground. He’s not a jiu-jitsu competitor, of course, but is no fool there either. He tends to tire his opponents out before finishing them, whereas Charles imposes his rhythm right off the bat until he finishes them. [Oliveira] is unpredictable and can knock him out and can submit him, and can take a beating [and come back]. I’d bet on Charles.”

Before fighting Michael Chandler at UFC 262, Charles Oliviera was never known for his knockout power. In that fight itself, Oliviera got rocked quite a few times before landing a combination of his own to win the fight via TKO in the second round itself. Many expected Oliviera to win that fight but not by knockout.  A lot of Oliviera’s knockouts are made possible with the use of accuracy and timing more than raw power.

Oliviera is an extremely dangerous striker at range and in tight, and his game has evolved exponentially over the years and is no doubt one of the best strikers in the game. Add his grappling credentials and he becomes one of the most all round fighters in the game. As for this fight, Oliviera seems to be a clear favorite but if the fight goes to the ground things could change. Oliviera’s BJJ skills are second to none but Makhachev’s wrestling or ‘Sambo’ what he likes to call it has been pretty effective till now. All those years of training with Khabib could get into play if required. Stylistically this is a tough fight for Oliviera and if he gets past Makhachev it would only stronger his case to be considered as the Greatest lightweight of all time.