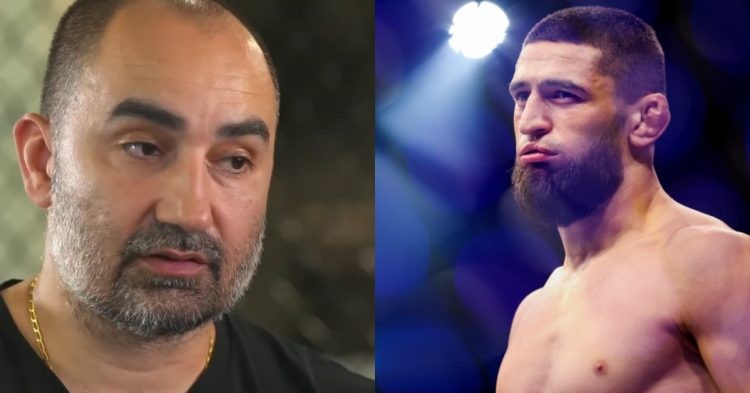 Khamzat Chimaev is perhaps the most popular active fighter in the UFC right now. His star power is set to get another boost this weekend. He will feature alongside Nate Diaz in the main event of the upcoming PPV, UFC 279. He is a massive favourite to win the bout and if he does manage to do that, Chimaev will establish himself as a solidified PPV star.

Although the fight against Nate is set to take place in the welterweight division, it is not the only weight class Khamzat wants to dominate. Chimaev made his UFC debut at 185lbs against John Philips in July 2020. He once again fought in the division as he took on Gerald Meerschaert in November of the same year. Since then, he was focused more on the 170lbs division.

However, his desire to fight at middleweight is still there. He has expressed his wish to fight Adesanya previously. It also made the fans wonder when Chimaev may move up. In a recent interview with ESPN, Khamzat’s coach Andreas Michael gave an update on when the 28-year-old may make the move to middleweight.

“I’d like him to fight (at welterweight) like, till he wins the title. Which Dana said would be like after this fight, not that we’re underestimating Nate now. I don’t wanna look past this. But you ask me when I’d like him to move to middleweight. I think (we’re) so close to the title fight right now. Let him get that chance and then go up to middleweight and we take it from there.”

Israel Adesanya is currently sitting on the middleweight throne without facing tough challenges so far. He has successfully retained the belt 5 times now and is set to defend it for the sixth time against Alex Pereira at UFC 281. It will be Izzy’s toughest challenge yet as Pereira has beaten him twice in kickboxing.

However, the weight class is very light on contenders past that. Although Robert Whittaker recently had a great win over Marvin Vettori, it is hard to imagine that the UFC will book a trilogy between him and Izzy right away. So a fight against Khamzat Chimaev will be a fresh challenge and Izzy would love it. During his appearance in Mike Tyson’s podcast, Adesanya called him a beast.

“This guy fights at welterweight, yeah, he’s fought at middleweight one time and he’s fought like a low-ranked guy and definitely can beat some middleweights but I’m like, ‘Show me something,’ show me something like he’s never… His last fight was impressive and I said I might not like you but if I’m impressed by what you do, I’ll give you props. Yeah, he’s a beast but he’s a beast at 170.” (h/t via SportsKeeda)

After UFC 271, Khamzat Chimaev called Israel Adesanya “easy money.” So the interest in the fight is certainly mutual. As Andreas Michael stated Chimaev is set to receive a title shot at the 170lbs division if he beats Nate Diaz. But that title shot is most likely to take place in the summer of 2023. If Adesanya manages to keep his belt till then, there is no doubt that UFC would love to book The Borz vs The Last Stylebender