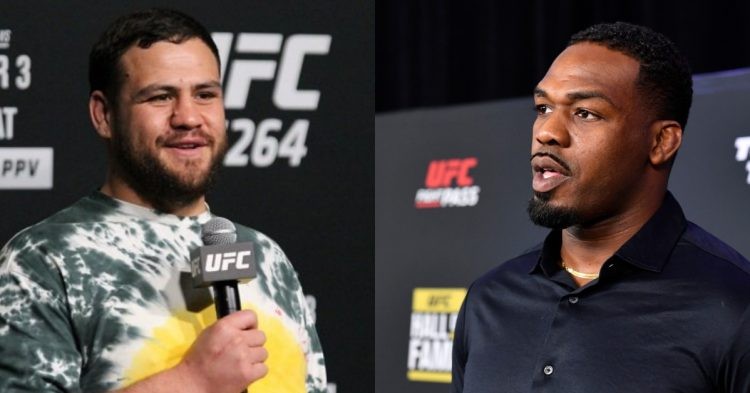 Tai Tuivasa will fight Ciryl Gane this Saturday at UFC Paris. The Australian fighter is as close to the UFC heavyweight title as he has ever been and beating Gane may just get him there. But it is not the belt that he is after! In a recent interview, Tuivasa stated that he’d rather have a crack at Jon Jones.

Every fighter wants to face the best in their division and Jon Jones is one of the bests. Although he does have one DQ loss, Jon is widely regarded as undefeated throughout his career. Jon has 14 championship fights in the UFC, more than any other fighter in the company. He is arguably the GOAT of men’s MMA!

Now that Jones is about to make his heavyweight debut at UFC 282, he is aiming straight for either the undisputed belt or the interim belt. While the UFC wants to book him against Francis Ngannou, Stipe Miocic seems like the more plausible candidate for Jones this December. However, Tai Tuivasa is also throwing his name in the mix.

Ahead of the upcoming UFC event in France, Tuivasa spoke to the media about his future. One fighter that he wants to face before ending his career, is Jon Jones. Although Jon has never fought at heavyweight before, Tuivasa thinks Jones has the ability to succeed in the weight class and called him the GOAT. But, Tai is not in it to just take part, he wants Jon’s head if they fight.

“I’d love to fight him. I’ve said it before: This is why I do this… One day when I wrap up this whole fighting gig, I want to say I fought this guy and that guy – the best guys. I don’t want to come out (of the sport) and I didn’t have the opportunity to fight the best. So I’d love to fight Jon, and I’d love to knock his head off, as well. That would be pretty cool.” (h/t via MMA Junkie)

According to Tai Tuivasa, Jon Jones approached him on Instagram. Apparently, Jon sent him a message and said that he will fight him if Tai keeps up the winning momentum. Jon’s message comes on the heels of Tai expressing the wish to fight him. Although Tai is “scared” about possibly standing across Jonny Bones in the Octagon, the 29-year-old is excited about it too!

“He messaged me actually, which was pretty funny… I must have said I’ll fight him [in an interview] and he’s going, like, ‘Keep winning, you’ll get your wish’ or something. I don’t know if he was trying to scare me or turn me on, but it did kind of both.” (h/t via MMA Mania)

As mentioned previously, Bam Bam will be fighting Ciryl Gane who is ranked 1st in the division. Although it does seem unlikely, there is a chance that Tai comes out victorious on September 3rd. If that does happen, Tai will find himself in a position where he could fight for the belt next. If Jon gets a hold of the belt, the promotion may very well book the fight.

Although Tai may not be the most technically efficient fighter, he is certainly entertaining. From his walkout to his fighting style, he would make a great opponent for Jon if the company wants to go that route.