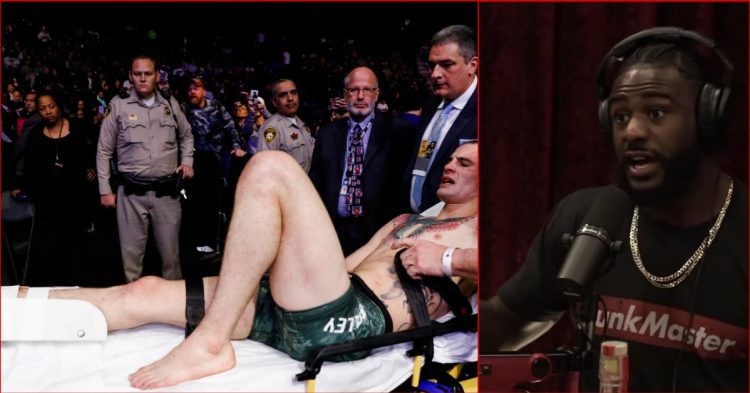 UFC Bantamweight Champion Aljamain Sterling thinks Sean O’Malley is weak! The champ was a guest recently on Joe Rogan’s podcast. During his conversation with Joe, Aljo touched on various topics, including potentially fighting O’Malley in the future.

Sean O’Malley is definitely the biggest name in terms of popularity at bantamweight. Although he is currently ranked outside the Top 10, Suga Sean has captivated the audience with his intense high-octane fighting style. However, it is not all sunshine for the young fighter.

Although there is no doubt about his skillset, Sean is not exactly the most durable fighter in the division. He has a knack for getting injured badly during his fights. In 2018, he took on Andre Soukhamthath at UFC 222. Sean looked to be phenomenal touch in the first two rounds, but a freakish leg injury caused the last round.

The injury was so bad that he could not even get up for the post-fight ceremony. It resulted in the now-iconic interview with Joe Rogan while he was lying on his back as medical staff were working on his injured leg. Although he got away with that one, the dodgy nature of the injury came back to haunt him 2 years later.

At UFC 252, O’Malley fought Marlon Vera in the co-main event of UFC 252. He was heavily favoured to win the bout. However, a calf kick from Chito Vera caused Sean to lose functionality in his right leg. This time around, O’Malley was not lucky enough as Chito knocked him out and handed him the first loss of his MMA career.

Since then Sean has rebounded with two back to back wins. However, a question mark remains on his fitness. Standing at 5’11, he is very tall for the weight class. But he does not have a very muscular frame, which makes Sean seem like he is not much of a physical force. Pointing that out on ‘The Joe Rogan Experience,’ Aljamain Sterling added,

“if I’m being honest, that Guy’s really f******* good… I feel like [Sean o’malley] might be a little bit weak though. I feel like if I grab that Guy and put a body lock on that Guy, I’d probably break his ribs and get a submission with a standing body lock.”

When can the fans expect to see Sean O’Malley fight for the UFC bantamweight title?

After beating Raulian Paiva at UFC 269 in last December, Sean O’Malley has not been active in the UFC. However, that is set to change next month as Sean is due to fight Pedro Munhoz at UFC 276. Munhoz is clearly on the decline and it provides O’Malley with the chance to finally enter the Top 10 of the division.

If the 27-year-old  manages to do that, he will potentially fight the bigger names in the division such as Frankie Edgar, Jose Aldo and Dominic Cruz. But there is a high chance that the UFC sets up the rematch between him and Marlon Vera next. Hence, fans can expect to see Sean fighting for the title in 3 more fights if he keeps on his winning momentum.