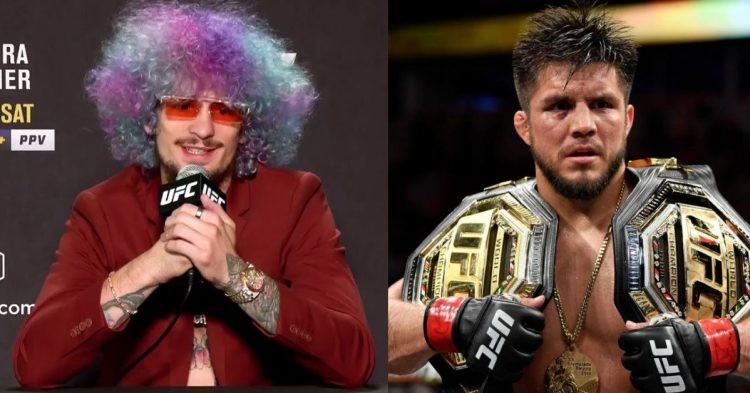 Former UFC two-division champion Henry Cejudo took retirement from the sport in 2020 after defending his belt against Dominick Cruz. Thereafter Triple C has hinted on several occasions that he will come back to the UFC if the offer is right.

Earlier this year, Cejudo said that he is down to make a return if he gets to fight for the featherweight or bantamweight title. However, UFC President Dana White thwarted his request and told him to get back in line before competing for the title.

In a recent podcast, Sean O’Malley who is also interested to face Henry Cejudo shared his thoughts on whether the former UFC champion will make a comeback. Moreover, Suga Sean also expressed his desire to train with him and do a podcast despite of his coach’s advising him against it.

However, the bantamweight contender revealed that the only condition under which he would love to take guidance from Cejudo is if he confirms that he won’t return to the UFC.

“God if he did retire it would be sweet to train with him. Learn some sweet s**t bro.”

The Schmo who was the guest on Sean O’Malley’s podcast said that Triple C would like to train the bantamweight contender and they should connect. With that being said, we could see Sean O’Malley and Henry Cejudo training together in the future.

Will Henry Cejudo make a comeback in the UFC?

Until now Henry Cejudo has only shown his interest in a title shot against Alexander Volkanovski or Aljamain Sterling. But the UFC has taken a strong stance that Triple C will not get a title shot in his comeback fight.

With that being said, there aren’t many big fights in the UFC that will give Cejudo the urge to make a comeback from his retirement. The only opponents who have the potential to get the crowd drawn and interest Triple C are Max Holloway and Sean O’Malley.

Besides, Cejudo’s demands of a higher fight purse are not met by the promotion. Therefore the likelihood of seeing Triple C once again in the UFC is very low.