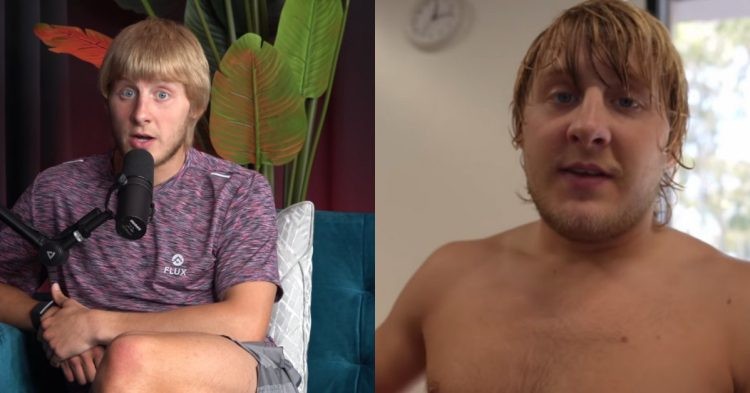 Paddy Pimblett has a brutal message for the fans ahead of his return to the Octagon at the upcoming UFC London. He has called out the hypocrisy that the online community has shown towards him. Paddy has let it known that he does not want the fans to advise him.

Paddy ‘The Baddy‘ will fight Jordan Leavitt on July 23rd. Ahead of the contest, he looks to be in fantastic shape. But that was not always the case. Pimblett is a very hard worker and gives it his all during the training camps. But outside of it, Paddy likes to enjoy his life to the fullest.

Being an active fighter means that they have to make a lot of sacrifices. Food is one such thing that a fighter has to consume very carefully. Having a wrong diet plan or eating junk food is strictly prohibited. But Pimblett is not the one who cares about the norms. The Brit loves to eat whatever he wants whenever he is not actively preparing for a fight.

But that means that he does put on a lot of weight during his off days. It has resulted in him being slandered online. During a recent podcast on his YouTube channel, Paddy spoke about the online abuse he had to suffer.

“I get fat-shamed terribly. If it’s a woman, it’s body empowerment. She’s making herself feel great. You know what I mean? When it’s me lads, I’m a big fat bastard.”

While some fans trolled Paddy Pimblett for his weight gain, others tried to advise him on how to keep his weight down. But the 27-year-old is having none of that. He does not want to listen to advice from fans who have no experience in the matter. Paddy is a staunch professional with 21 MMA fights. Hence, he has been down this road before.

“General Public telling me like, ‘oh lad you need to do this, you know lad.’ And what’s your record? How many fights have you had son? How many weight cuts have you done? Yeah, none. F*****g shut up!”

Although it is true that the Liverpool native has always been the one to successfully make the weight cut in time for his fights, it will become more and more difficult to do so in the future. For example, Jose Aldo struggled to make the cut to 145lbs. But he then moved down to bantamweight successfully. Aldo’s move was made possible after sorting out his diet.

In some recent pictures, Paddy could be seen having a very difficult time making the cut to 155lbs. The longer he keeps putting his body through such a difficult weight-cutting process, the harder it will be for him to sustain it. However, Paddy’s coach did mention that Pimblett has cut down his body fat over the years and has a much easier time making the weight.

What do you think of Paddy’s weight-cutting process? Do you think he should stop eating junk food outside training camps? Or do you think he can maintain the current method? Let us know your thoughts on the process down below.