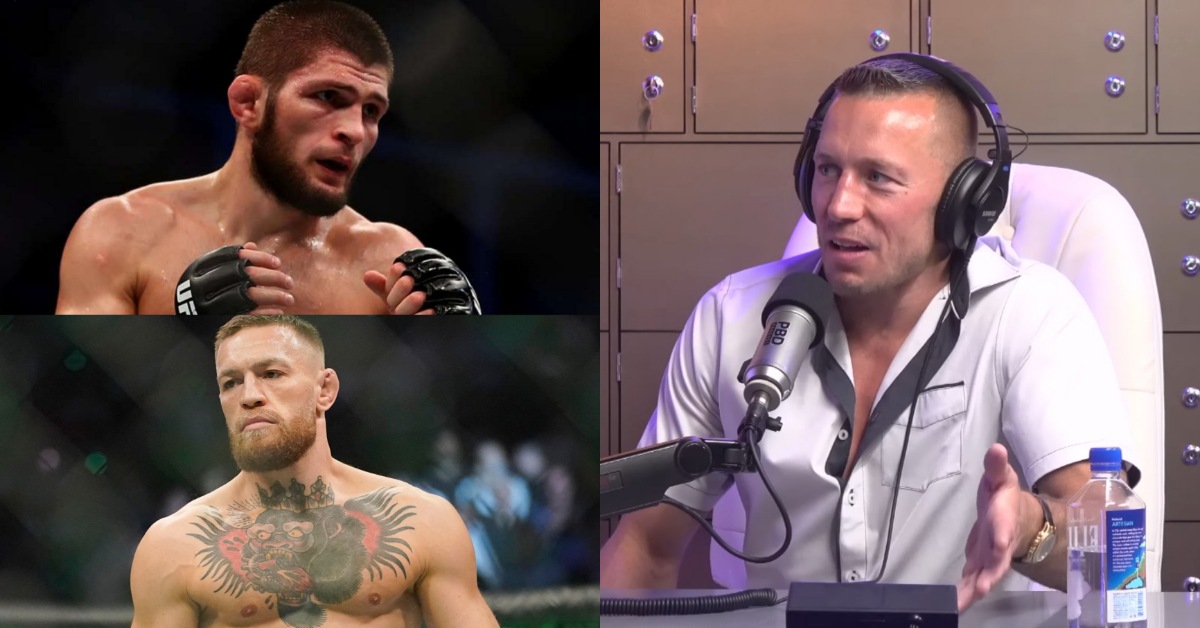 Is Georges St-Pierre coming back for one last fight against Conor McGregor or Khabib Nurmagomedov? In a recent interview, GSP completely ruled out the possibility of a return. But he also stated that he can certainly beat both of them if the motivation was there.

GSP last competed in 2017 when he submitted Michael Bisping to become the Middleweight Champion at UFC 217. However, he soon relinquished the belt and walked away from the sport for good. Although, there were rumours of him fighting Khabib Nurmagomedov in 2020 for a super fight. But nothing transpired as both parties lost interest in the contest.

However, that did not stop the fans from wondering what could have been! GSP is currently 40-years-old. Hence the window of the fighting has certainly passed by. But during his most recent appearance on the PBD Podcast, GSP expressed that he can still get the job done against ‘The Eagle’ if his heart is set on it. He included McGregor in the mix as well. St-Pierre said,

Will Georges St-Pierre ever come back?

Georges St-Pierre is one of the biggest stars in the sport of MMA. But it seems like he has left fighting in the rear-view mirror. In the interview, GSP stated that he is focusing all of his energy on himself to improve his mental health. He said a lot of fighters go through a tough period after retiring. Hence, Georges wants to keep himself busy with various ventures.

GSP also revealed that his motivation now is to impart knowledge to the up and coming fighters. He doesn’t want the youngsters to repeat some of the mistakes that he made early in his career. The Canadian is currently working on a few instructional videos which are due to come out sometime this year.

In an earlier segment of the interview, GSP revealed that he has made a lot more money than $7 million. It seems as if he was very smart with his money. He recently appeared in a few Marvel projects as well, which provide some financial support too. GSP is very eloquent with his analysis. As a result, he may have a future in the commentary booth as well if he wants it.