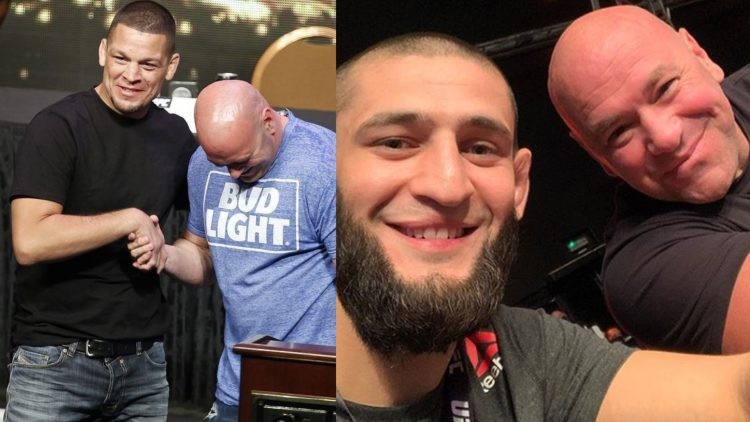 In one of the most anticipated fights of the year, Khamzat Chimaev will take on Nate Diaz in the main event of UFC 279. Now the biggest reason fans will be tuning in to watch this fight is that this might be the last fight of Nate Diaz in UFC.

Many fans believe that the fight itself is not going to be that competetive and Chimaev will dominate Diaz as long as the fight continues. However, this can be a hhuge PPV if UFC stacks the card with big names. A possible fight between Michael Chandler and Dustin Poirier can be in the co-main event of UFC 279.

And UFC can sell a lot of PPVs with Nate Diaz and Khamzat Chimaev in the main event. 2022 has not been a great year for UFC when it comes to PPV sales and UFC 279 can change those stats. But, will Khamzat Chimaev get his PPV share for his first UFC main event?

In a recent interview with MMA Hour, Khamzat Chimaev reveals whether he is getting his biggest UFC fight purse of his upcoming fight against Nate Diaz at UFC 279. Chimaev also said that he will be happy to get the PPV shares.

“We Will See. I don’t know, I don’t care so much about that(fight purse). I’m happy with what I have now. If they give that I’ll be happy.”

How much does Money Khamzat Chimaev earn from his UFC fights?

Khamzat Chimaev has only four fights in UFC, but he is one of the biggest stars in the company. It’s very likely that he will be fighting for the welterweight title next if he gets past Nate Diaz at UFC 279.

Khamzat Chimaev can be a huge superstar if he manages to win the UFC title. And UFC desperately needs stars like Chimaev on its roster right now.