“If You Are a Muslim, You Should Have Good People Around You”- Khabib Nurmagomedov Condemns Khamzat Chimaev for Missing Weight by 7.5 Lbs, Blames Chimaev’s Coach and Teammates 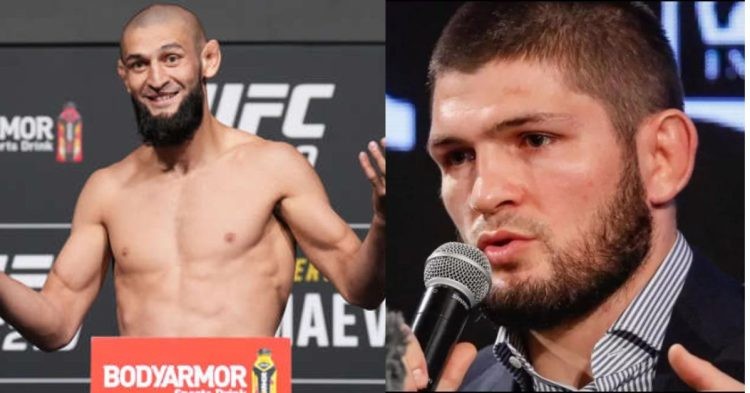 Khamzat Chimaev is currently in the spotlight for all the incidents and crazy things that are happening since the pre-fight pressure of UFC 279 and Khabib Nurmagomedov has somethings to say about that. Chimaev failed to make weight for his scheduled main event against Nate Diaz.

The weight miss fiasco became a big issue that even the former lightweight champion Khabib Nurmagomedov commented on that. Shortly after UFC 279, Khabib appeared in an event hosted by Human Appeal, while questioning Chimaev’s team and noting that the Chechen fighter is not surrounded by enough Muslims.

“If you are a Muslim, you should have good people around you. Muslims who can say: ‘Hey, don’t do this,’” Nurmagomedov said talking about Khamzat.

“When you become famous and rich, when you gain power and [around you] there are no people who will give advice or you do not listen to them, then something will happen. You need good people, even if you don’t like it, you need them,” he added.

The Chechen came in at 178.5 pounds, which is 7.5 pounds more than the weight mark of 170 pounds. This in turn started a shuffle in the main card that repositioned him against Kevin Holland for the co-main event.

Meanwhile, Diaz was rescheduled against Tony Ferguson for the main event, and later on, both Diaz and Khamzat went on to win their bouts by submission. In conclusion, Khmazat is still undefeated and got another win against Kevin where he took no damage.

The former UFC lightweight champ Khabib Nurmagomedov stated that Khamzat should have more Muslims around him and on his team so that they can give good pieces of advice to him.

Due to the recent incidents at UFC 279 regarding Khamzat failing to cut his weight, Khabib took notice of ‘Borz’ and his team. Talking about Khamzat, Nurmagomedov said:

“I recently watched the weigh-in of Khamzat Chimaev. I followed what was happening with his weight and looked at his team.”

“There are no Muslims around him and this is very bad. Because if you are a Muslim, you need good, strong people around you,” Khabib added.

Ironically, Khabib has also been slammed many times for missing weight when he used to compete in the UFC. It is also worth noting that Nurmagomedov has been called a ‘weight bully’ due to his failure to cut weight multiple times and also never moving up a weight class.

‘The Eagle’ missed weight ahead of his fourth UFC fight against Abel Trujillo at UFC 160 in May 2013. In the third attempt at the Ferguson vs. Nurmagomedov bout for UFC 209, the fight was canceled as Khabib was hospitalized ahead of the fight because of weight-cut issues.

When Khabib fought in the UFC for the last time against Justin Gaethje at UFC 254, the former champ also struggled to make weight. However, in this departing outing, Khabib managed to cut weight and defeat Gaethje and remained the undefeated lightweight champ.