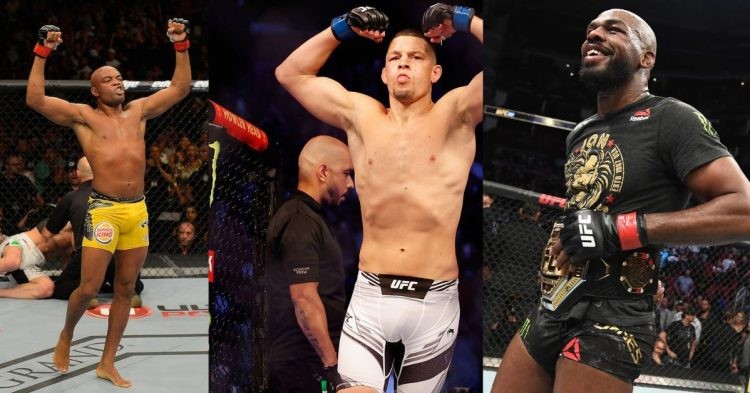 Nate Diaz is a veteran of the sport, He has been competing since he was 16 years old and is currently 37 years old. Under his current UFC contract, he is only left with one bout, which will probably be his final one.  The matchup with Khamzat Chimaev is scheduled at UFC 279 in Las Vegas.

In the last half a decade, Diaz has not seen much success in his fights, but he remains one of the sport’s most important characters. Because of this, he will be the main attraction on a card in Las Vegas, the home of fighting

These days, it’s extremely uncommon to see a non-title bout serve as the UFC’s main event, but Diaz is an exception. This is due to he is well-known in the MMA community, He is described as the “OG” for his larger-than-life personality of saying things how he sees them

In an interview with ESPN, when asked about who he considers the “GOATS” of the sport he stated, “The OGs … Anderson [Silva], ‘GSP’, Fedor Who? Jon [Jones]? Out of the question, I don’t care. Silva, too. Like, I mean, with all due respect to them because they are great, but if you do steroids that’s just completely — if you’re caught, you’re a f****** … you know what I’m saying?”

Nate is not the only one who believes that those combatants who are busted for steroids shouldn’t be brought up in the discussion of “Goats”. That is the sole reason Jones is discarded from the conversation. Had he not been caught using steroids he would undoubtedly be considered a “GOAT”

Speaking on the same, Nate stated, “If you’re doing it out loud, that’s different. They were all shooting steroids then whoop everybody’s ass. It’s like, well, I’m willing to fight [expletive] on steroids. I don’t give a f***. But if you’re doing it, like let’s just talk about it. You do steroids, I’ll smoke weed then let’s get in there and squab. I don’t give a f***.”

Although Jon Jones is one of the finest athletes the sport has ever known, the former 205-pound UFC champion has a troubled past with drugs. Then, in 2017, he completed a 15-month suspension after testing positive for the anabolic steroid Turinbol.

Prior to his UFC 200 match against Daniel Cormier, Jones had been given a one-year suspension by USADA for using two prohibited substances; however, this was overturned at an arbitration session.

Since then, he has been tested positive for two times and has been accused of hiding from USADA numerous times. It is really unfortunate what Jones did to his own career. His fans can only hope that he fights clean from now onwards and represent the sport and himself well.