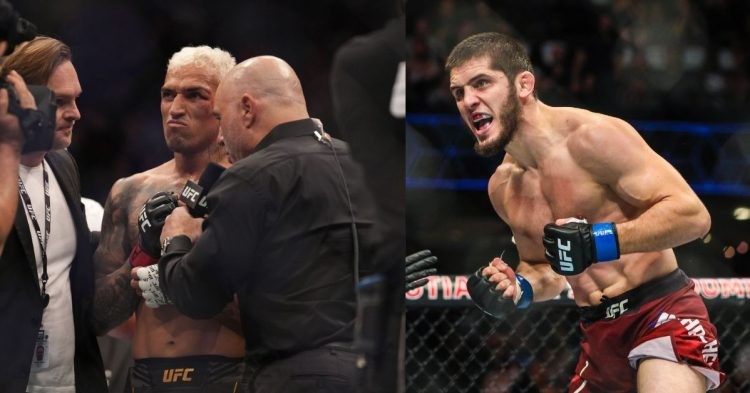 Charles Oliveira has been on a spectacular run of not just impressive victories but also the finishes of formidable opponents. The reason behind this is due to his impeccable jiujitsu. He has created an aura behind his skillset.

Even Joe Rogan weighed in on the same during the podcast. The Joe Rogan Experience exposes its audience to a variety of various ideas and ways of thinking through interviews with celebrities, performers, scientists, sports, and people who simply have fascinating tales or interesting minds.

In one of his episodes, He talks about how many times, fast-paced strikers such as Dustin Poirier and Justin Gaethje can find some success in getting him hurt and knocking him down due to the sheer aurora Oliveira possesses. They do not wish to engage with him. Since it becomes a possibility that he may grab his opponent’s legs and that could be a done victory deal for the former lightweight champion.

During the podcast, Rogan stated, “It doesn’t matter what is happening in a fight if you go to ground with him it is deep sh*t”

He is persistent with submissions rather than with other types of submissions. High-level leg locks are deeply ingrained in his approach, which accounts for his grappling lineage.

Given their fighting mindsets and approaches, the contest is quite intriguing. Despite this, both combatants are at ease standing and exchanging blows. Their real talent, though, is on the ground. Brazilian jiu-jitsu and sambo wrestling are engaged in combat.

There were numerous predictions as to who would win. Given the circumstances, Oliveira is more at ease standing than Makhachev. Therefore, it comes to reason that he would try to combat him where he had the best chance of winning.

There are many speculations that can be made, for all we know, the fight is around the corner and one can sit back and enjoy the show.