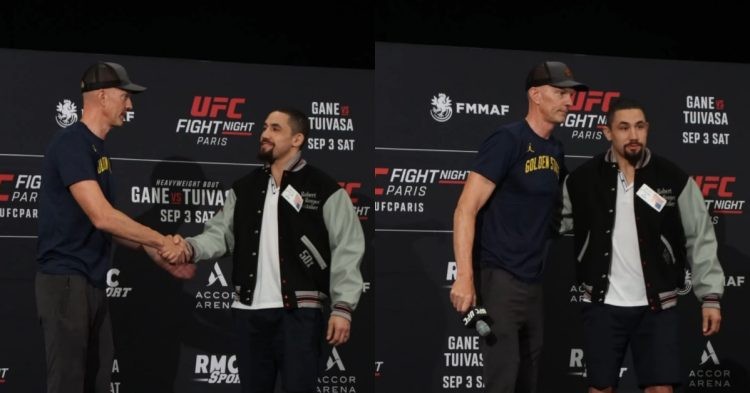 Robert Whittaker has the reputation of being one of the good guys in MMA. That reputation gets another boost ahead of UFC Paris. He will fight Marvin Vettori in the event and ahead of it, He gets a USADA clean test jacket as he completes his 50 successive anti-doping tests successfully.

United States Anti-Doping Agency (USADA) conducts drug tests on UFC athletes. The company started using USADA as their anti-doping agency in 2015. Although there have been patches over the years when the fighters spoke out against USADA, it has been a peaceful and fruitful partnership otherwise.

They have the tradition of presenting fighters with jackets as rewards for completing a certain number of drug tests consecutively. The fans recently saw Israel Adesanya getting one ahead of his fight against Jared Cannonier at UFC 276. But this time, it was Robert Whittaker’s turn to be on receiving end of it. The Reaper was obviously happy with it and commented on it afterwards.

“You know, it’s just another feather in the cap. My dad always told me, If you have to cheat to win, don’t play and I’ve stuck with that my entire career. It’s cool to be recognized for it.”

Although the gesture was certainly a nice one, the fans have questioned USADA’s credibility. During UFC 276, the anti-doping agency presented the same jacket to the UFC middleweight champ Israel Adesanya. However, it irked the fans. They cited Izzy’s gynecomastia to fuel their side of the argument.

Underneath the YouTube video, the comments were filled with fans who displayed their displeasure about USADA’s lack of credibility. It has to be mentioned that USADA did not flag Adesanya despite having issues with gynecomastia, which is caused by steroid abuse.

There have been occasions where USADA’s actions have come under question. In 2018, Jon Jones had a positive anti-doping test. Because of it, the whole event was in jeopardy. But Jon was cleared to fight Alexander Gustafsson at UFC 232 as it was explained that Jon’s positive drug test was due to pulsing.

In 2019, Nate Diaz was also flagged as USADA found some banned substances in his samples ahead of UFC 244. But Nate too was given permission to fight as an official statement explained that the amount of substance present was not enough to give Nate any performance-related boosts.

Even recently, Paulo Costa spoke out against USADA as they allegedly showed up at his place in the middle of a weight cut and collected blood samples. The incident angered Dana White, who slammed USADA as well.