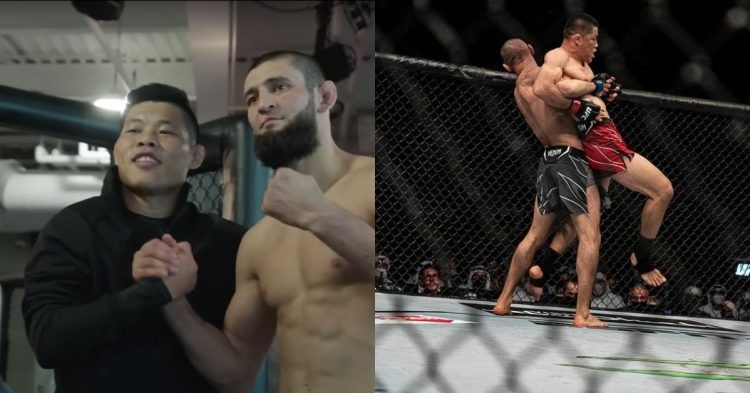 Khamzat Chimaev is not only a rising prospect in terms of fighting ability but also in terms of marketably. He possesses a larger than life personality. He is known to fight anyone, anytime, anywhere. He talks the big game but also walks on it.

That being said, He also is a true sportsman. He gives his opponents their respect where it is due. Recently, Khamzat met his former opponent, Li jingliang at UFC PI. They fought against each other which resulted in a dominating win for “Borz“. Khamzat was preparing for his next bout against Nate Diaz at UFC 279. At the same spot, Li Jingliang was noticed to be gearing up for his training session as-well.

Amidst training session, the spectator was none other than, Chimaev. Post the session, the two met. They Shook hands and took pictures alongside each other. They then had a brief conversation which was featured in the first episode of UFC 279 embedded.

Li’s translator translated what Li conveyed to him in Chinese. He stated, “We know each other through MMA fighting, if you need anything in China just let me know anytime.”  Khamzat appreciated this gesture which created a wholesome moment for the fans.

At the UFC 273 pre-fight press conference, Li Jingliang who was the Chimaev’s former opponent, made an unexpected appearance at the venue. He asked his former opponent about their upcoming battle against Gilbert Burns on Saturday.

Jingliang showed Chimaev respect before asking if he intended to approach Burns in the same manner as he did during their bout. In their fight, at UFC 267, Chimaev fought against Jingliang, Chimaev quickly attempted a takedown and hauled Jingliang across the octagon. He then took him to the ground and quickly won via submission inside one round.

To which Chimaev gave a very vehement reply and said that no matter what, He will “Smash that guy”. This humble gesture by Li Jingliang was appreciated by fans of the sport to a massive extent. Months later, when the two met again, the same gesture of respect was shown by the two. This level of sportsmanship creates perfect role models for students of the sport.