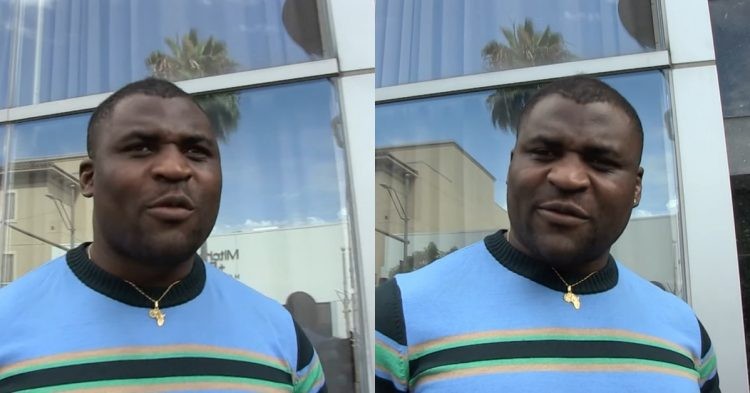 Francis Ngannou gives an update on his return. (Images via Twitter)

UFC Heavyweight Champion Francis Ngannou reveals a possible timeline for his return to fighting. Ahead of stepping inside the Octagon to defend his heavyweight title against Ciryl Gane at UFC 270, he suffered a serious knee injury. Despite having ACL and MCL tears, Francis went on to beat Gane in January. But he has not competed since then.

He later had surgery to repair his knee injury and is currently in rehab. Initially, it was estimated that Ngannou will be unavailable till 2023. But now it seems like he may fight much sooner than expected. TMZ recently caught up with the UFC champion and asked him about his recovery process. Francis stated that he had ACL and MCL repairment surgery and the rehab was going well.

The Predator was then inquired about when the fans may see him back fighting. In answer to that, Francis Ngannou added,

“If everything goes well, I’ll be ready by the end of the year. I said because it’s gonna be 9 months. Let’s say late December or early next year.”

Who will Francis Ngannou fight next upon his return to the UFC?

During the interview, Francis Ngannou also stated who he wants to fight on his return to the Octagon. Although he refused to name any particular opponent, Ngannou wants the division to sort itself out a bit more. His last opponent Ciryl Gane is set to headline the upcoming UFC Paris card against Tai Tuivasa. Depending on the result, it could produce the next contender for Ngannou.

However, there were a lot of rumours about Jon Jones making his heavyweight debut against Stipe Miocic. It was also supposed to have the interim championship on the line. The winner would have become the next title contender naturally. However, things have gone quiet on that front. But there are other possible contenders for Francis Ngannou.

Tom Aspinall vs Curtis Blaydes is set for UFC London on July 23rd. Aspinall has had a monstrous rise to the top of the heavyweight division. With entire Britain behind him, Tom may just skip the line and get the next crack at the champ. But it will be difficult for Curtis to do the same as he has already lost to Ngannou twice previously. Hence, there will not be a shortage of challengers for Francis’ throne.

Do you think Francis Ngannou will be able to complete his rehab and return in time to fight this year? If he does, who do you want to see the 35-year-old fight? Let us know your thoughts in the comments down below.