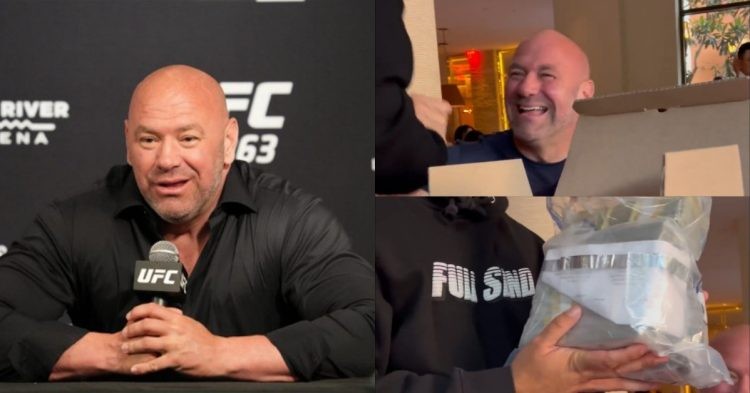 UFC President Dana White never shies away from controversy. He does not buckle under the pressure from the media and is always unfazed in the face of tough questions. Recently, he gifted Kyle Forgeard from the Nelk Boys $250,000 for his birthday and it sparked a lot of conversation regarding White’s treatment of his fighters.

It is no secret that White is a big admirer of the Nelk Boys. He is a regular guest on their podcast and regularly invites them over for the big UFC events. Dana White has his own whiskey brand called Howler Head and the YouTubers gifted him a customised Mercedez Maybach van which was painted with the logo of the whiskey brand.

Dana was a guest on the Pat McAfee show recently and he was asked about the large amount of cash that he gifted Kyle. The 52-year-old slammed the media for making a big issue out of it. According to him, it was his own money and he had the right to spend his money whichever way he wanted.

“First of all, all these people on the internet, go f**k yourself. I’ll spend my money how the f**k I wanna spend my money. Mind your own f***ing business, no. 1. No. 2, if you look at what Kyle and the Nelk boys have done, as far as Howler Head and a lot of other things that they have done, those kinds have never asked me for anything ever.”

“And believe me, the $250,000 that I gave him for his birthday, does not cover the things that kid has done for me. So don’t count other people’s money and mind your own f***ing business.”

According to a report from WayOfMartialArts, the lowest tier of UFC contracts ranges from $10,000 to $30,000. It is usually reserved for fighters who are on the lower end of the talent pool. The middle tier ranges from $80,000 to $250,000. Main event fighters and championship-level fighters are usually included in this particular category.

Only the very elite fighters belong in the top tier which ranges from $500,000 to $3,000,000. But this category includes only a very handful of fighters. Compared to the big stars in boxing, UFC superstars do not earn even remotely close. Hence, Dana White handing out $250,000 to one of the Nelk Boys is not good optics especially when some of the UFC fighters have to work two jobs to provide for their family.

Recently cut fighter Louis Smolka took to Twitter to slam the company president after the video emerged of Dana, handing out the cash. He called for the fighters to finally form a union.

When we starting the union bois https://t.co/gqZkYAPOCe

Previously, superstars like Jorge Masvidal and Jon Jones have had a very public fallout with the company regarding the issue. Although Masvidal recently got a new lucrative contract, the issue with Jones has gotten quiet in recent times. However, the fans are yet to see the former light heavyweight champ in action. Even celebrity boxer Jake Paul has voiced his support for the underpaid UFC fighters.

What do you think of the issue? Do you think Dana White handing out $250,000 in cash is a bad look for the company when some fighters are making $10,000? Or do you think Dana was right to slam the media for reporting on it? Let us know in the comments down below.