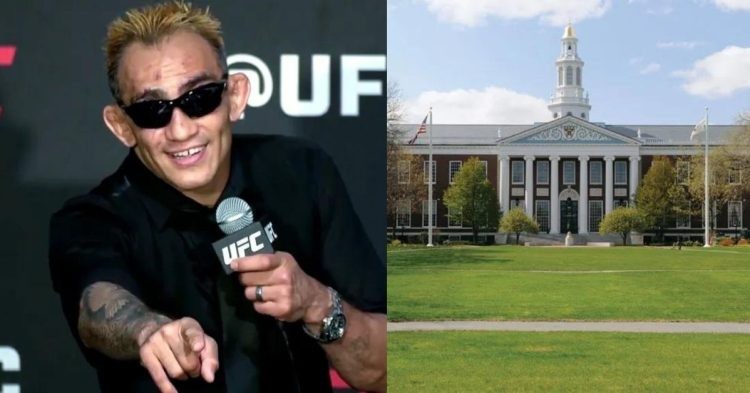 After the fight, the former interim lightweight champion of the UFC said he would attend Harvard University to study business. In the post-fight press conference, he stated, “I’m already going back to school for business in Harvard in about a month; in a couple weeks, actually. So, I kept my word. I’m keeping my word. So, you guys are like, ‘Well, he’s going to go back to school. Yeah, right?’ No, I’m going back to school; going for my business credentials from Harvard.”

Tony Ferguson made it clear that he intended to pursue both his academic goals and his fighting career at the same time. According to the MMA legend, it would be comparable to returning to school while enrolled in college and participating in wrestling.

Tony Ferguson reacts to his submission defeat against Nate Diaz

In the main event of UFC 279 on Saturday, the former UFC interim champion lost via submission to Nate Diaz. Ferguson was being very competitive and successful in the standup, particularly with leg kicks, during the fight.

However, Ferguson attempted a takedown in the fourth round at the request of his team, and that is when Diaz got him in a guillotine choke (21-13 MMA, 16-11 UFC). Ferguson is aware that was a mistake.

In the post fight press conference, He stated, “My corner went for the shot, but should’ve kept it standing,  I can’t say anything else. It’s not like he’s old and slow and stuff. Hopefully, the crowd that was at UFC 279 there present got some blood splattered on them or something. I had fun in there.”

He is 38 years old, has no immediate plans to retire. He genuinely feels that he still has plenty of gas left in the tank despite being on a five-fight losing run. It would be interesting to see what lies ahead in his career.