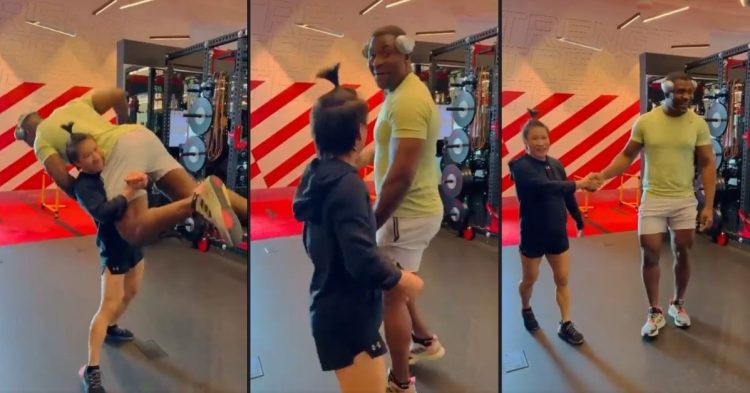 Zhang Weili displayed her superhuman strength as she lifted Francis Ngannou in the air! In an impressive feat, the former Strawweight Champion, despite being warned by the heavyweight champion, lifted him up in the air much to the shock of Ngannou.

I didn’t want her to do it I was scared of her hurting her back and was trying to explain this to her….then found myself suddenly up in the air.

Her strength ratio is through the roof 📈 pic.twitter.com/smhsP9H91u

Sharing the video on social media, Ngannou reveals how he was scared Zhang could hurt her back while trying to lift him up. Moreover, with less than 10 days away from the title fight against Carla Esparza, it’s safe to say, it was a really dangerous thing to try. Be that as it may, it was only when Ngannou was in mid-air that he realized Zhang Weili’s “strength ratio is through the roof”.

now you know how Shaq felt when you picked him up pic.twitter.com/UpR0fsbXUo

Yeah Weili getting that belt back 😭😭

Fans were also left in disbelief, leaving the video with some hilarious reactions in the comments section. “I’m Calling USADA” a fan commented. Some called her a “beast”, while others couldn’t help but send their wishes to the Chinese fighter.

After a close split decision loss to Rose Namajunas in her attempt to reclaim her lost strawweight gold, Weili bounced back with a vicious KO win over Joanna Jędrzejczyk back at UFC 275, to earn herself another shot at the title.

She will take on Carla Esparza in the co-main event of UFC 281 on November 12 inside Madison Square Garden, New York. It’s an exciting match-up between a knockout artist and a seasoned grappler. It’s safe to say, the two losses against Rose Namajunas and the training with former two-division champion Henry Cejudo will come in handy heading into the biggest fight of her mixed martial arts career.

It will be easier said than done against Carla Esparza, who has completely torn through the strawweight division with dominant wins to her name. Can Weili snap Esparza’s 6-fight winning streak and become a two-time strawweight champion? Only time will tell.