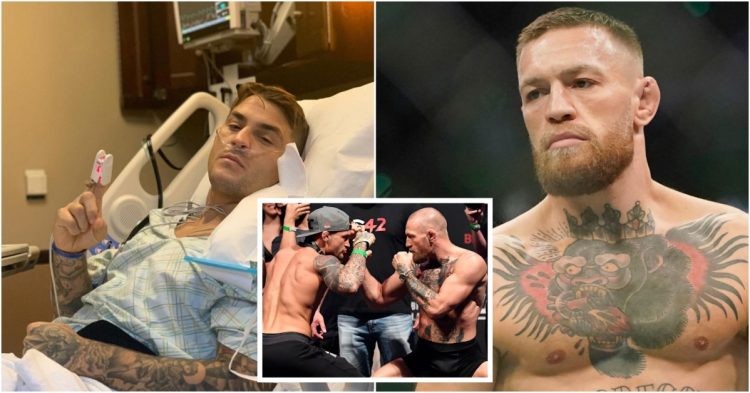 Conor McGregor and Dustin Poirier have a back and forth. (Credit: @dustinpoirier and SKY Sports)

Dustin Poirier recently revealed to the fans that he was in the hospital to treat a bad case of staph infection. Apparently, Dustin’s body stopped responding to antibiotics. Hence, he needed urgent medical attention to sort out the situation. He received a ton of good wishes from the fans. But Poirier also got an unexpected message from one of his bitter rivals, Conor McGregor!

Conor McGregor and Dustin Poirier had one of the biggest series of fights in recent years. Although their first bout at UFC 178 was not the main event, their next two bouts headlined UFC 257 and UFC 264 respectively. Their rivalry turned bitter after Poirier became the first fighter to stop Conor with strikes at UFC 257. In the next fight, Conor broke his leg, which did not allow the fight to have a proper conclusion.

Hence nobody expected Conor to send out a wish to Dustin after his recent medical diagnosis. However, in his typical fashion, Conor sent out a tweet wishing Dustin’s speedy recovery. But, his choice of words did not appease The Diamond, who immediately fired back!

Conor McGregor and Dustin Poirier are interested in a fourth fight

Conor McGregor will start his Hollywood journey with the Road House remake. So McGregor was shooting for the movie for quite some time. In his reply to Conor, Dustin Poirier also made a reference to that. At the same time, he took a not-so-subtle dig at Conor’s absence from the USADA testing pool. It also seemed like Dustin was calling out McGregor for another bout.

You done filming Roid House and ready to get slapped around again!?

Never to back down from a challenge, The Notorious One immediately accepted the challenge to fight and issued an intimidating warning to the former UFC 155lbs interim title holder. He revealed that he is currently in Amsterdam and sent an early invitation for his debut movie to Dustin and his wife Jolie Poirier.

Ye I’m in Amsterdam jacked like van damn. You weren’t just hurt pal. You were scared hurt don’t forget it. I’m coming back to put you in a box. Full of it. I’m sending you off this earth. Permanent. Stay waiting for the road house as well pal you and the missus will love it

While Dustin is coming off a massive win against Michael Chandler at UFC 281, he is currently dealing with a serious health issue. So he will certainly need a few months to back to full fitness. On the other hand, Conor will start his USADA testing protocol in February 2023. So both will be out of action for a significant period of time. So the fourth fight between them may take place in the second half of 2023.

The Daily Mail reported that UFC 257 sold 1.6 million PPVs. While another report from MMA Fighting suggests that UFC 264 sold 1.8 million PPVs. So it definitely seems like UFC will be more than happy to run the fight back. Especially with recent PPVs not performing well, UFC can certainly use another big Conor McGregor PPV in 2023.