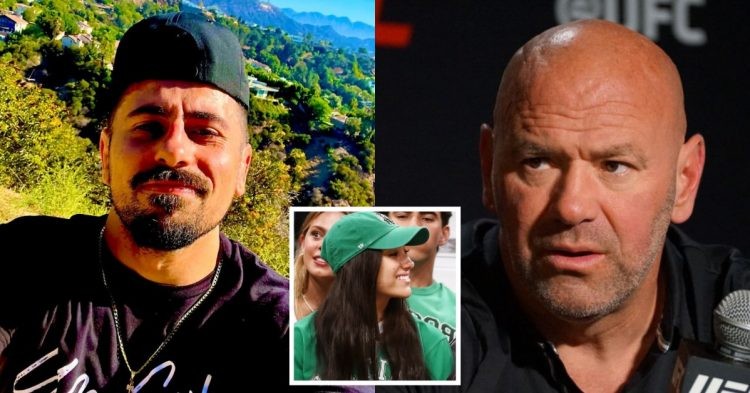 UFC President Dana White posted some very vague messages over the last few days on his Instagram account. However, before fans had the chance to properly get an idea about what Dana was hinting towards, he took down the messages. But now, there is some context to what Dana’s messages meant. As previously reported, the matter involved his family’s safety.

After almost 2 days of Dana’s deleted messages, screenshots have emerged of his posts and the interaction with the alleged perpetrator. An ex-fighter and UFC gym employee Brandon Voce Gaglio Bender allegedly posted a message on his Instagram account, where he threatened UFC President Dana White and his family, including his 16-year-old daughter Savannah White.

In some screenshots, fans can also see White having a back-and-forth with the person in question. During one such online interaction, Brandon replied to one of Dana’s Instagram posts and wrote, “F** u b***h.” Within 3 minutes of that comment, a furious Dana replied, “F*** U, you piece of f***in s**t. I’m coming for u now you mother f***in CRACK HEAD. Threaten to r*** my 16 year old daughter?”

Brandon Bender – Who is the man to threaten Dana White?

Dana White, in a deleted message, gave an update to the fans and revealed that the authorities have taken Brandon Bender into custody. White also thanked all the fans, media members, and law enforcement personnel who helped to resolve the situation. As Dana mentioned, Savannah is underage. So there is every chance that Brandon Bender gets in some serious trouble with the law, if proven guilty.

However, at the moment, it is unknown which charges if any have been applied against the ex-fighter. So who really is Brandon Bender? As previously mentioned, Bender was a UFC employee. However, following the incident, UFC clarified Brandon had parted ways with the company more than two months prior to the incident. Before working for the UFC, he was also an MMA fighter.

The 35-year-old started his Mixed Martial Arts (MMA) career in 2006 with a unanimous decision win over Brian Whiteaker. Brandon Bender has an MMA record of 12-2. He had his last fight in January 2020 at Bellator 238. He had two separate stints at Bellator. In his first Bellator fight, he beat Josh Herrick in 2011. He came back to the promotion in 2013.

Upon his re-entry to Bellator, Brandon lost to Travis Marx and Joshua Jones. He also beat Mario Navarro in his second Bellator run. However, between his bout against Mario Navarro and Joshua Jones, there was a gap of almost 6 years. He has fought at featherweight and bantamweight in his career. He finished 11 of his opponents with submission and only one of his wins came via decision.