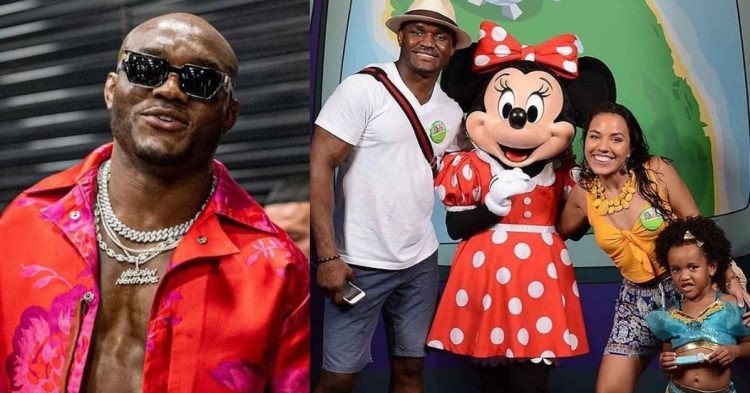 Former welterweight champion Kamaru Usman is one of the biggest UFC stars in the world. Apart from being a UFC star, he is a Hollywood star now. ‘The Nigerian Nightmare’ recently made his acting debut in Marvel’s Black Panther: Wakanda Forever.

Usman is known for being a family man and a great father. However, the former P4P No.1 has revealed that he is no longer in a relationship with his ex-girlfriend. Usman broke up with his ex, Eleslie Dietzch earlier this year. They have a daughter but now it seems they are no longer together.

After admitting that he is single now, Usman jokingly said: “And you know all that time wasted, all the good time” later saying: “joking, joking, joking…”

Kamaru Usman has many incredible achievements in his MMA career so far. He is one of the highest paid fighters in UFC right now. And with him becoming a Hollywood star will certainly bring him more fame. However, the Nigerian Nightmare is not a fan of dating a lot of women.

Kamaru Usman made it clear that he wants “love” in his life after his breakup with his long time girlfriend, Eleslie Dietzsch. Usman stated:

As Usman is secretive about his personal life, it is not known why he broke up with Dietzch. However, he has confirmed that there is no bitterness now between him and his ex. For now, Usman is enjoying his life being a Hollywood star.

Who is Kamaru Usman’s daughter?

Kamaru Usman was in a relationship with Eleslie Dietzsch, who is of Brazilian descent. Usman first addressed his love life publicly back in 2016. Dietzsch also used to attend Usman’s fights along with their daughter.

Although Usman and Dietzsch have been in a relationship for more than five years, not too many pictures of the duo have surfaced online, indicating the respect they have for each other’s privacy.

The pair has an eight-year-old daughter named Samirah, who was born in 2014. Usman often posts pictures and videos of him with his daughter on his social media. Samirah has an Instagram account and is often seen accompanying his father during his training sessions.

In Usman’s last fight with Edwards, Samirah was seen in the audience. Samirah was devastated after witnessing her father getting brutally knocked out by Edwards. After the fight, Samirah was seen getting carried out of the arena, while she was crying.

I feel this deep. I do not suggest bringing family whatsoever. Especially the children. This is different fighting. I’ve done both sides of this and feel going to the mission solo is best. You can see family again post battle. Will definitely be continuing this way going forward. https://t.co/Ve71l4KeN5

Conor McGregor also took to Twitter to address this. He suggested that a fighter should never bring his family and especially the children to the fights. However, Usman was offended by this post by McGregor and their rivalry was reignited.

‘The Nigerian Nightmare’ will look to bounce back from his loss at UFC 278 against Leon Edwards. He will seek revenge for his only UFC loss and hope to reclaim his title in their trilogy fight which is soon to be announced.