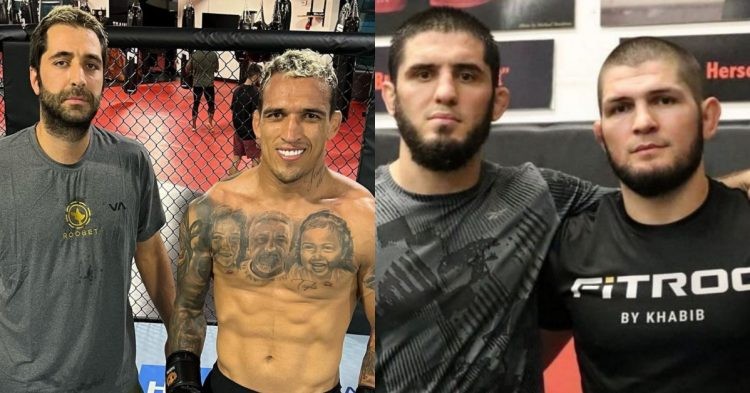 Charles Oliveira will once again find himself in a championship fight on October 22nd. In the UFC 280 main event, he is set to go up against Islam Makhachev for the vacant lightweight title. However, there is a bigger goal for Charles than just winning the belt. He wants to beat Islam in such a way that it brings Khabib Nurmagomedov out of retirement!

Since the fight was announced months ago, Oliveira’s camp has been consistent about the fact that they want Khabib next after beating Islam. Recently, Charles’ head coach Diego Lima has confirmed the notion as he mentioned Khabib in an interview with MMA Junkie. During the interview, he predicted a knockout finish for Do Bronx this Saturday.

“Islam is a very good fighter, we know that. He’s coming from a very good history in the fight. But we that Charles is much better, Charles has a history. It’s not the same because Islam is coming from another type of fights. But Charles will be the champion and he will knock out again.”

Ahead of the fight, Team Khabib targetted Charles Oliveira multiple times. While Islam Makhachev stated that the Brazilian fighter may not even show up for the event in the UAE, his cousin Khabib has flat-out dismissed Oliveira’s chances in the upcoming PPV.

Diego Lima has commented on it and wondered how The Eagle would respond if and when Oliveira beats Islam this weekend. He also dared Khabib to come back after Oliveira humbles the Nurmagomedov protege.

“Khabib brought a very big responsibility for Makhachev. Because after Saturday, when Makhachev lost, Khabib, what he is going to do? What are his expectations? Is he coming back? Is he fighting again?”

The coach also added that Oliveira will be ready for Khabib if he comes back. Lima added, “Charles is no. 1, he’s ready for everyone, anyone. If Khabib wants to come back, we’re be prepared for him.

Charles Oliveira has previously stated that he would love the opportunity to bring Khabib out of retirement. But as the fans know, Nurmagomedov is bullish on the fact that his time is over and he does not want to fight ever again. However, Oliveira does not hold a grudge against the former undefeated 155lbs for not wanting to compete and respects the decision.

Charles Oliveira has held the UFC lightweight title, which, only 10 fighters managed before him. However, at one point, it did not look like the 32-year-old would get anywhere near the title picture. Oliveira had 8 losses in his first 19 fights in the promotion. With a record like that, fans do not expect a fighter to attain gold in the toughest fight promotion in the world.

However, since 2018, Charles has remained unbeaten and has won 11-fights in a row. But that change came when he joined Chute Boxe Academy in 2018. Under the guidance of Diego Lima and other coaches in the esteemed gym, Oliveira has reinvented himself. In a recent interview, Oliveira has given all the credit to Lima and the Brazilian gym.

The MMA gym has produced UFC champions like Anderson Silva, Shogun Rua and Cris Cyborg. Oliveira revealed that the hard sparring during the workout sessions has prepared him for wars and war will take place in the Octagon at UFC 280 when he goes up against Dagestani phenom, Islam Makhachev.

What are your thoughts on the fight? Do you think the pair of Diego Lima and Charles Oliveira will work their magic once more at the upcoming PPV? Let us know in the comments down below.