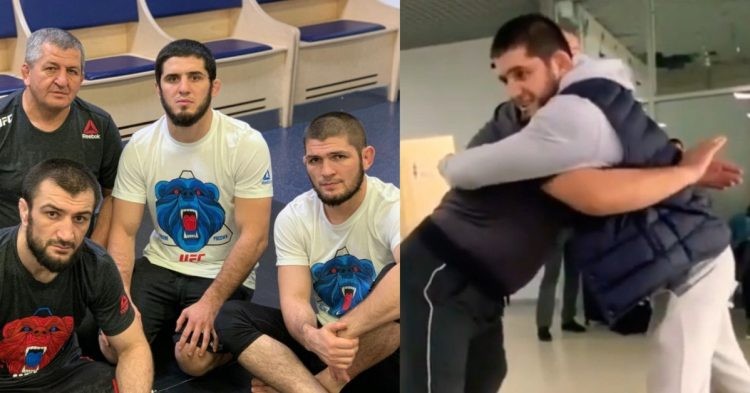 Islam Makhachev is currently ranked 4th in the lightweight division and is set for the biggest fight of his career. In his next bout, Islam will take on the no. 1 title contender Charles Oliveira for the vacant lightweight belt. The pressure will be on Makhachev to capture the lightweight title and continue the legacy of Abdulmanap Nurmagomedov.

Makhachev currently trains at American Kickboxing Academy (AKA). However, the fighting spirit inside him was a result of rigorous training sessions that he went through under Khabib Nurmagomedov‘s father Abdulmanap Nurmagomedov. Khabib and Islam are cousins and Abdulmanap took them under his wings and trained them to be the fighter that they are at the moment.

Although the relationship between Abdulmanap and Islam was that of a student and a teacher, it does not mean that there weren’t any lighter moments. A recently surfaced video shows Islam and Abdulmanap meeting inside an airport and Nurmagomedov testing Islam’s takedown defence. Abdul could be heard saying, “Let me test your strength… Is that all you got?”

In the video, Abdulmanap and Makhachev locked in and started wrestling on their feet. Khabib’s father then tried to trip Islam and it almost worked. However, once Islam tried to apply the same trick, he could not even move Abdul. It just goes to show why Khabib, Islam and their extended family members respected Abdulmanap so much!

Abdulmanap Nurmagomedov, unfortunately, passed away in 2020 after a long battle with Covid-19. It left a lasting impact on his son Khabib Nurmagomedov’s life. Following his father’s death, Khabib promised his mother that he will not continue fighting without his father in the corner. Hence, The Eagle retired after beating Justin Gaethje at UFC 254.

However, that did not stop the legacy of his family from staying alive in the promotion. Before his untimely demise a couple of years ago, Abdulmanap Nurmagomedov predicted that Islam would indeed be the fighter to succeed Khabib in the 155lbs division and become the next Dagestani champ.

“I think Islam can beat anyone. He’s younger, hungrier, and he should take Khabib’s place. That way I solidify my coaching abilities. So Khabib retires and another champion emerges who’s also my student.” (h/t via SportsKeeda)

The moment of truth is almost upon the fans. Charles Oliveira will be a formidable opponent at UFC 280 and the excitement for the fight is at a fever pitch. Even Khabib Nurmagomedov has claimed that it is a dream fight. Can Islam live upto the lofty expectations? Only time will tell.