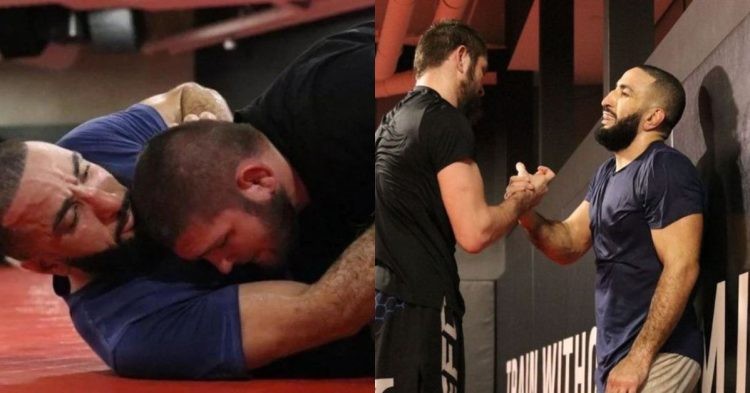 Belal Muhammad recalls the difference in how Khabib Nurmagomedov would train him as compared to Islam Makhachev. (Credits: YouTube)

Joe Rogan is known for having insightful discussions with MMA personalities. As such, Joe, along with his guest Belal Muhammad, spoke about Khabib and Islam in the latest episode of “JRE MMA Show.”

Previously, the #4 ranked UFC welterweight established himself as a serious contender, after beating Sean Brady at UFC 280. Throughout his training camp, it was well known that he was working closely with Khabib Nurmagomedov and Islam Makhachev. As such, Belal speaks about the difference between training with Khabib as opposed to Islam.

“Islam is nice. He’ll tell you what you need to do and you need to do this way. And, he’ll show me the technique with it. When Khabib’s on top of you, he’s like breaking me at every single point… and he’s like, ‘No brother. You just got to keep going.’, says Belal.

Further, Belal tells Rogan, “He’s just like laughing as he’s talking to the guys outside of the cage… And I’m feeling like, disrespected. But like, this is Khabib.” According to the 34-year-old, he was feeling almost disrespected by Khabib and the way he trained him. However, Belal realized that ‘The Eagle’ was simply trying to bring out more from him.

Belal Muhammad and his relationship with Khabib’s camp

Previously, Belal has expressed his gratitude to coach Khabib and his guidance in his fights against Vicente Luque and Sean Brady. Other than their routine training, Khabib and Co. would also do other activities like diving into frozen lakes and playing soccer together.

After beating prospect and rising star Sean Brady, Belal has put the entire welterweight division on notice. After working closely with Khabib and Islam, Muhammad has improved considerably. As such, If Belal is to continue working with Khabib and continue his hot form, it is very possible for him to soon be in conversations for a title shot.

With Gilbert Burns questioning why Belal is currently higher than him in the rankings, a matchup could soon be on the cards. Currently set to take on Neil Magny, Burns is likely to come calling for Belal if he wins. Although many believe Burns is a bad matchup for Belal, stylistically, it does make for a contest that may turn out to be a Fight of the Year contender.

Who do you think Belal fights next? Will a showdown with Burns be his next outing or perhaps a different opponent? Leave your thoughts in the comments below.