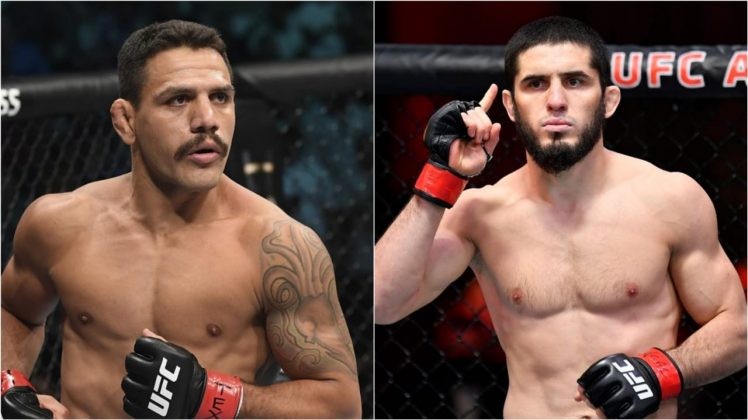 Rafael dos Anjos vs. Islam Makhachev fight is called off once again. It looks like the fight is becoming the new Khabib Nurmagomedov vs Tony Ferguson.

Rafael dos Anjos was going to face the Dagestani fighter Islam Makhachev at UFC 267 in Abu Dhabi. The fight is not taking place because RDA has stated that he has a “terribly injury” (via Twitter).

Rafael dos Anjos and Islam Makhachev were initially supposed to fight at UFC 254 back in October 2020, but the fight got scrapped after RDA tested positive for COVID-19. The bout was rescheduled for November but was called off due to Makhachev contracting a staph infection.

It seems like Islam Makhachev is not happy with the former UFC lightweight champion pulling out from their bout. Makhachev took to twitter to display his frustration on dos Anjos. Makhachev tweeted, “@RdosAnjosMMA I don’t believe that you’re injured .., again #chickenfever”

RDA responded to Makhachev’s tweet by saying, “Do you really think I would fake a surgery? Coming out of another terrible injury. Unlike you I have a family that depends on me and I don’t have another man paying my bills.”

Do you really think I would fake a surgery? Coming out of another terrible injury. Unlike you I have a family that depends on me and I don’t have another man paying my bills. https://t.co/PDvQ2rhZsq

Makhachev then posted a rather sarcastic tweet containing only a hashtag #bigdramashow, in response to RDA’s tweet.

Makhachev looking for an opponent at UFC 267

According to the Ali Abdelaziz, the manager of Islam Makhachev, they are looking for a new opponent to face Makhachev after dos Anjos was forced to withdrawal from the contest.

Abdelaziz said that his two preferred candidates to replace dos Anjos would be Tony Ferguson, who is in the midst of a three-fight losing skid, or Dan Hooker, who is coming off an unanimous decision victory over Nasrat Haqparast at UFC 266.

The #5 ranked lightweight contender is on a collision course in the lightweight division. Makhachev has only lost one fight in the UFC and has been undefeated since 2016. Makhachev is climbing up the ladder in the rankings and would be looking forward to fight for the title soon.

Who do you think Islam Makhachev should face next? Let us know about your opinions in the comments section below.