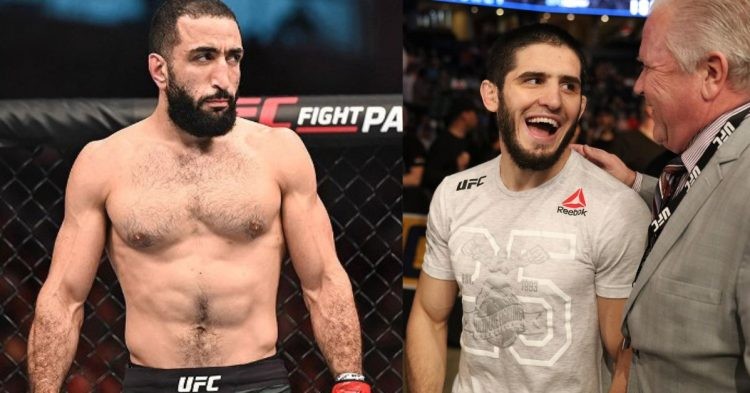 Belal Muhammad is all set to fight undefeated Sean Brady at UFC 280 which will take place in Abu Dhabi this Saturday. Brady has a perfect 15-0 record in his professional MMA career so far, while Muhammad has gone 7-0-1(NC) in his last eight octagon appearances.

It seems like Muhammad was aware of the possible dangers Brady possesses and hence sought assistance from Khabib and his team. According to Muhammad, Khabib Nurmagomedov will also be in his corner at UFC 280. Islam Makhachev is another fighter who will have Nurmagomedov in his corner for his mega-fight with Charles Oliviera for the vacant lightweight title.

Muhammad in a recent interview talked about his experience training with Makhachev and how he has helped him in his preparation for Brady.

Talking with Farah Hannoun, Muhammad said “Seeing how good he really is, I’m like wow and just how humble he is in showing me a million different things and showing me how to win positions, that was the greatest thing because a lot of people, fans don’t get to see the cool side of him because he’s hilarious. He’s so funny, if people really got to spend a day with him they’ll understand he’ll be a superstar because he’s hilarious, he’s so down to earth.”

Muhammad is currently ranked fifth in the welterweight division, while Brady is positioned at number eight. This fight holds massive significance as the winner of this one may be next in line for a title shot after Usman vs Edwards rematch is done earlier next year.

It seems like Muhammad is putting himself under unnecessary pressure by saying he ‘can’t lose’ with Khabib being present in his corner. Brady on the other hand looked amused by Muhammad’s comments, claiming “Belal is not Khabib” and having Nurmagomedov in his corner won’t make much of a difference for him.

This is surely going to be a tough fight for both fighters. Considering their fighting styles, seeing a finish is unlikely. In the end, we are set for a super competitive and super close fight that will go down to the wire.