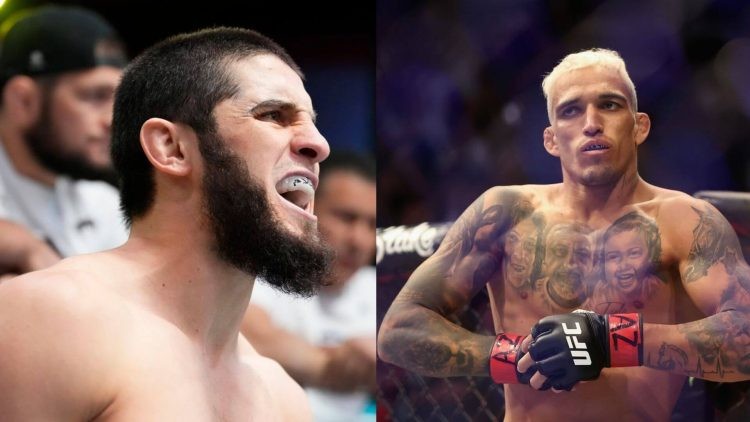 Islam Makhachev is set to face Charles Oliveira for the vacant lightweight title in the main event of UFC 280 on Oct. 22 in Abu Dhabi. In a recent episode of ESPN’s “DC & RC”, Islam Makhachev stated that he is convinced that Charles Oliveira did not want to fight him but the UFC forced him into accepting the title fight against Islam.

Islam Makhachev alleged that Oliveira was forced by the UFC into accepting the title fight against him or else they would give Michael Chandler his spot. According to Islam, the Brazilian made several excuses before the fight was made official. The only reason Oliveira agreed was that the UFC gave him no choice:

“He said, ‘Islam has to fight one more time,’ or something like this. But the UFC told him. ‘Hey, if you don’t take this fight, we’re gonna give the chance to Michael Chandler. That’s why he took this fight.”

The Russian also condemned Charles for choosing to pursue money fights against Nate Diaz and Conor McGregor instead of fighting real contenders in his division.

“He tried to go Diaz or McGregor, but he forgot my name. And when they asked about me, he said he needs money or something like this. But when he fought Dustin and Justin Gaethje, he didn’t think about money.”

The former champion, Oliveira is set to face Islam Makhachev for the vacant title at the main event of UFC 280 on October 22 set to take place in Abu Dhabi.

Charles Oliveira says Islam Makhachev’s arrogance will be his downfall

‘Do Bronx’ was stripped of his belt in his last outing, after he missed weight for his title defense against Justin Gaethje. Even though Charles won the fight, he still has another fight before getting the title back.

After winning his last fight against Justin Gathje, Oliveira called out Conor McGregor for a big-money fight. But he was forced with no option but to accept the Russian’s challenge for the now-vacant lightweight title.

“They’re being arrogant and that’s what will kill them,” Oliveira said.

“The arrogance from their manager, former fighters, their arrogance will kill them. If they think they’re going to come here and think this is a joke, I’m going to tell you one thing.

“No one will ever hit me harder than life has hit me. I escaped a heart condition. Doctors told me I would never fight or do anything sport-related but I became the UFC champion.”

Oliveira is widely regarded as the most dangerous lightweight at present. ‘Do Bronx’ has the most finishes in UFC history and is also known for his lethal striking and elite grappling which has made him an icon in the UFC. It would be interesting to see who will win this fight especially when both of them have a similar style.