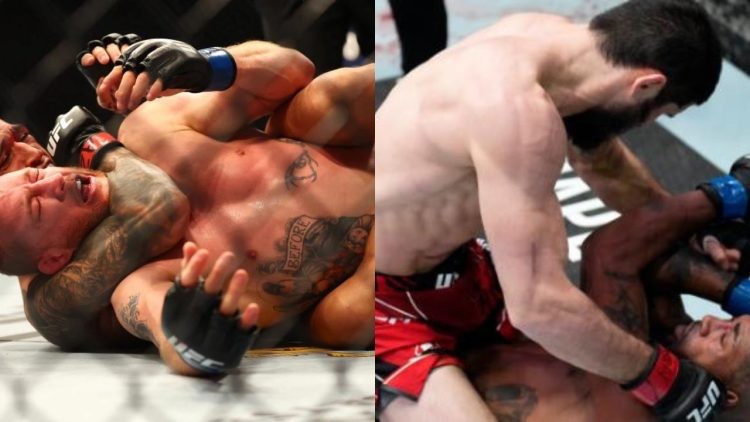 Charles Oliveira vs Islam Makhachev: Who has the better win streak?

Charles Oliveira will lock horns against Islam Makhachev at UFC 280. Taking place in Abu Dhabi, the fight for the vacant title will be the biggest lightweight fight in recent years. With both fighters currently on a high, the showdown is definitely one for the ages.

Previously, Charles Oliviera lost his lightweight title after failing to make the weight at UFC 274. Due to what many believe to be a faulty scale ahead of his UFC 274 bout with Justin Gaethje, ‘Do Bronx’ was stripped of his title. Now he must go through Khabib Nurmagomedov’s successor to do so.

Seriously, NO BIAS here. Which win streak resume is better leading up to their first title shot? Speak your mind. pic.twitter.com/rkbG5LeZkT

Ahead of the matchup, there has been a lot of debate surrounding the pair. More specifically, there have been a lot of comparisons between Islam’s and Charles’ journey to a title shot. Whilst Charles had to toil for 11 years, putting together a run of 8 consecutive wins against some big names, many feel Islam had an easier route.

At first glance, Islam has more wins (10) compared to Oliveira’s 8, yet the level of competition on The Brazilian’s resume is levels above that of Makhachev. Moreover, many have drawn attention to the fact that Islam gets his shot after beating Bobby Green, who was on short notice whilst Oliveira got his beating an in-form Tony Ferguson.

Others have also pointed out that Oliveira has taken on Michael Chandler, Dustin Poirier, and Justin Gaethje in his last three fights. Arguably, the biggest names in the division and Oliveira finished all three of them. On the other hand, Islam’s most dominant victory was over Dan Hooker, who was on short notice as well.

Charles Oliveira vs Islam Makhachev: A Look Ahead

Make no mistake, Charles Oliveira faces his toughest challenge yet as he takes on Islam Makhachev at UFC 280. The Dagestani has shown a certain grit and raw strength, similar to his predecessor and coach, former champ Khabib Nurmagomedov.

According to many, the fact that the fight takes place in Abu Dhabi is an unfair advantage to Islam. Seen as the challenger to the throne, Islam should not be having the home advantage. Interestingly, Charles has revealed that Makhachev actually turned down the opportunity to fight in Brazil instead.

Should Oliveira close out the fight in a dominant fashion, a potential super fight could be at hand. However, should Makhachev win, who do you think his first defense will be against? Leave your thoughts in the comments.