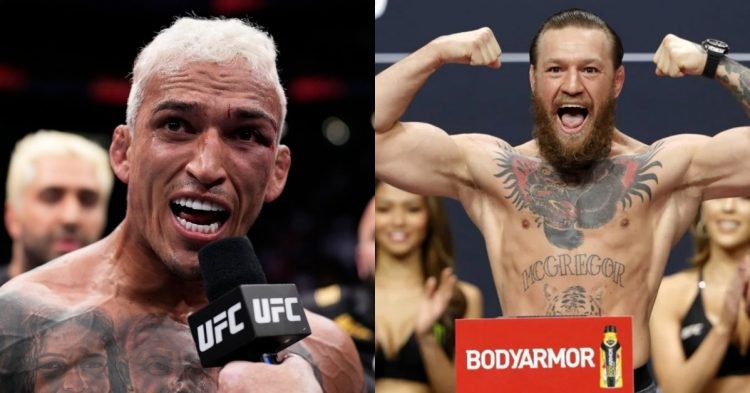 Charles Oliveira wants to fight Conor McGregor for the vacant UFC Lightweight Championship next. There was some chatter lately that Oliveira may be open to fighting Islam Makhachev. But his recent comments end all the speculation on who his preferred opponent is.

Charles Oliveira has been going up against the most dangerous fighters in the lightweight division. Lately, he has faced Kevin Lee, Tony Ferguson, Michael Chandler, Dustin Poirier and Justin Gaethje in his last 5 fights. Although those wins have done a lot to secure his outstanding legacy, it may not have been very financially lucrative.

It seems like Charles Oliveira wants the big fish in his next fight. In a recent interview with ESPN Brazil, the no. 1 155lbs title contender opened up on the possibility of taking on the Irishman in his next fight. However, he is not approaching it as a cash-grab fight. Instead, he spoke about what kind of an impact it would have on his resume. ‘Do Bronx‘ added,

“It would be a very good fight for me. It would put a lot of money in my pocket, and [at this moment] that’s the most important thing. And it would also be really good for my legacy, for me to have in my story… He’s a guy who’s made history, so I think it would be great,” (h/t via The MacLife)

Is Conor McGregor the next in line to face Charles Oliveira?

A fight against Conor McGregor is career-defining in the sport of MMA. Wins over him turned Dustin Poirier Khabib Nurmagomedov and Nate Diaz into mega-stars. Hence, It is always smart to call out the 33-year-old whenever there is a possibility of a big fight taking place. The current state of the lightweight division certainly provides that opportunity.

The lightweight division is currently the most star-studded in the UFC. With the above-mentioned fighters such as Poirier, Gaethje and Chandler, all losing to Charles Oliveira very recently, the only other options left are Islam Makhachev and Beneil Dariush. However, it is rumoured that they will be matched up against one another very soon.

That leaves only one big name in the weight class, Conor McGregor. The former UFC double champ is probably at the lowest point in his career. Not only has he lost two successive fights against Dustin in 2021, but Conor is also healing from a terrible injury which saw him snapping his ankle at UFC 264.

However, things are now looking bright for the Irishman. Recently on his YouTube channel, The MacLife, McGregor uploaded a video where he was seen kicking with his injured leg once again. Although the video was a very short one, it gave the fans an idea about how close Conor is to full fitness.

The Dublin native was not pulling back while hitting the heavy bag and he seemed to generate a ton of power behind his kicks as well. UFC President Dana White confirmed months ago that Conor will indeed fight this year. Hence the footage of him kicking gives White’s claims a lot more validity.

So the question becomes, is Conor McGregor going to face Oliveira next? By the looks of it, it is the best decision that the company can make business-wise. Oliveira has lost some shine by losing his belt on the scales after missing weight for UFC 274. So a win over Conor McGregor to become the champ once again will only help to grow his brand value even more.

The UFC too will have a win-win situation in their hands if they decide to give green light to the fight. The event is guaranteed to have a lot of PPV buys. On top of that, the business will be even better if Conor wins as well. Hence, giving McGregor the opportunity to fight for the vacant title seems like a no-brainer to the layman.