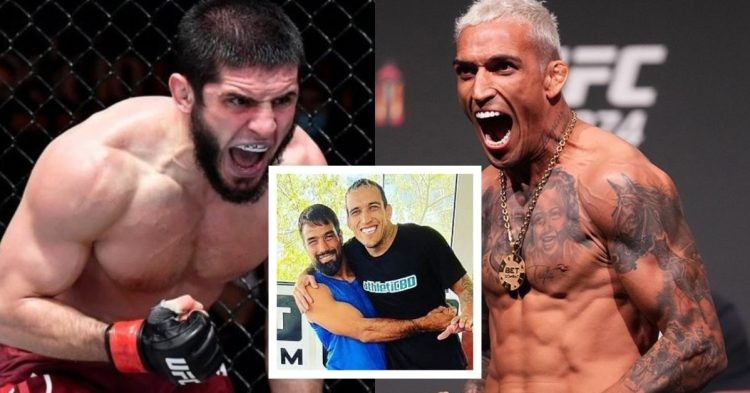 Former UFC lightweight champion, Charles Oliveira faces the wrestling prodigy Islam Makhachev in their much-anticipated title fight at UFC 280. Ahead of the bout, Alireza Noei, Oliveira’s coach has made some stern statements for Makhachev.

The Russian is hailed as one of the best wrestlers in the promotion, and his grappling skills are only second to the former lightweight champion, Khabib Nurmagomedov. However, Noei stated that despite Makhachev’s best wrestling abilities, he won’t be able to beat the Brazilian as the Russian claimed.

Recently the Iranian wrestling coach gave some insight into Oliveira’s preparations for his main event fight on October, 22.  Noei said: “I tried a lot [to takedown] Charles but with him, you can’t. I’ll tell you now; you can’t stabilize him on the ground.”

Noei has been training ‘Do Bronx’ for Makhachev, but now after witnessing Oliveira’s wrestling improvements, the Iranian coach is confirmed that Makhachev won’t be able to dominate Oliveira.

“I think that in this fight, Charles won’t fall. Islam won’t be able to take Charles down, but if he does, from underneath he’s very secure. He’ll either stay underneath to catch him or he’ll just be able to get up and keep it standing,” Noei added.

‘Do Bronx’ is already a threat on the ground because of his elite submission skills. Now after improving his wrestling skills, he is confident going into Saturday’s main event bout. Apart from that, Oliveira is also a dominant force on feet.

In his recent fights, the Brazilian has been able to withstand striking battles with some of the best strikers in the division the likes of Michael Chandler, Justin Gaethje, and Dustin Poirier. In all these fights, Oliveira was knocked down but came back with his own shots to win all the fights by stoppages.

Charles Oliveira and Islam Makhachev will headline the main event of UFC 280 for the vacant lightweight title. The Brazilian has been called the greatest submission specialist in UFC, while Makhachev is known for his unmatched wrestling.

However, as per Oliveira’s wrestling coach, Makhachev’s Dagestani wrestling won’t be much of a problem for ‘Do Bronx’. In the same interview, Noei stated that the Brazilian is a fast learner and has figured out to beat Makhachev.

“Charles is a guy that learns a lot easier than other fighters. We’ve already trained a little about Islam’s wrestling because Islam is left-handed. So you know that his left side is stronger, left hand, left leg,” Noei added.

Oliveira is riding an 11-fight win streak, with phenomenal victories over Chandler, Poirier, and Gaethje. He also holds the record for the most submissions (16) and most finishes (19) in the history of the UFC.

On the other hand, Makhachev is on a 10-fight win streak and has won all four of his UFC fights via stoppages. The Russian believes that he will dominate Oliveira in the early rounds and knock him out in the third.

However, looking at both fighters’ standup skills, it is easy to determine that ‘Do Bronx’ has much better striking skills and also has shown the ability to withstand damage before coming back with his own. But in this sport, anything can happen, which is why one cannot be too sure about the outcome.