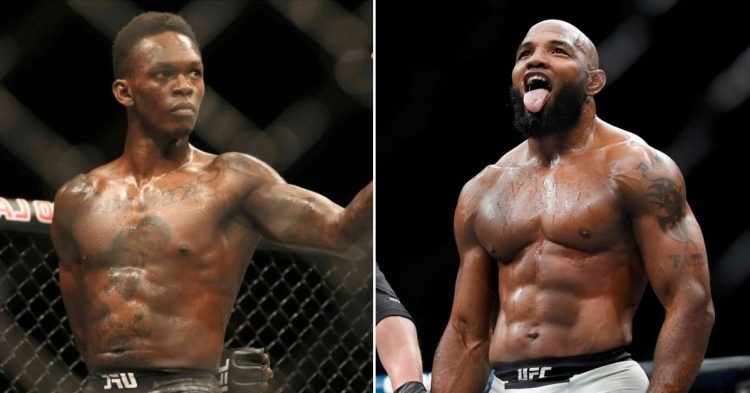 Israel Adesanya made a startling remark about former multiple time title contender Yoel Romero. Adesanya alleged that Yoel Romero was popped during his fight at UFC 248, and claimed that if it comes out to be true, he beat Romerp while he was “juicing.” In a recent conversation in the lead up to his title defense against Paulo Costa at UFC 253, Israel Adesanya made some startling remarks.

Yoel Romero was scheduled to take on Uriah Hall, however, Romero later pulled out of the bout due to an undisclosed reason. While there were reports that it was due to an injury, nothing was announced officially from the UFC. Israel Adesanya picked up the entire situation and alleged that Yoel Romero could be “popped” during his fight at UFC 248.

“But some things are not being spoken for that should be spoken for, but nobody’s asking the right questions. It doesn’t bother me. I beat Romero. If something comes out and he popped, I still beat him when he was juicing. I said this before: I’m going to pop [Costa] before [the U.S. Anti-Doping Agency] does, and I plan on doing just that.”

Israel Adesanya is expected to take on undefeated Paulo Costa in the main event of UFC 253. Both the fighters are undefeated, with one of them, most likely to lose his undefeated streak come UFC 253. After a lackluster performance against Yoel Romero at UFC 248, where Adesanya was criticized for very little action inside the octagon, Adesanya expects Paulo Costa to bring the fight to him. It will be interesting to see how will Adesanya fare against a dangerous and volume striker like Paulo Costa.

Israel Adesanya hasn’t changed his statements that Paulo Costa is doping. Additionally, he also put Yoel Romero in the same mix after the reason for his withdrawal from the Uriah Hall fight was not disclosed. Adesanya also reacted to the recent video that Paulo Costa posted on Youtube, ridiculing the current Champion for running away from the action. Adesanya stated.

“He can make any kind of tapes that he wants to make. I’m just going to keep doing me like I always have.”

Possible Reasons for Cancellation of Dustin Poirier vs Tony Ferguson