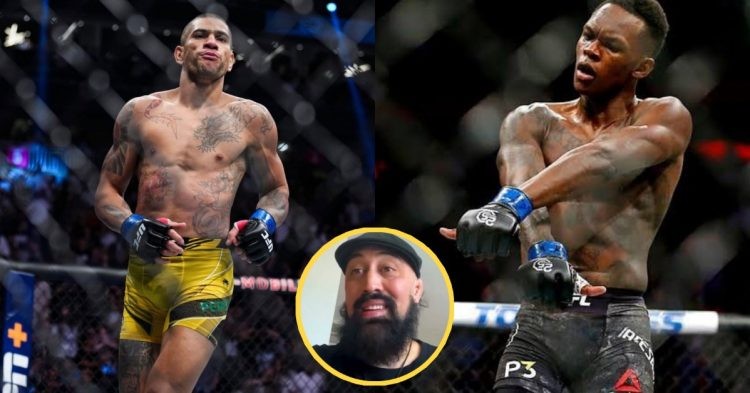 Coach Eugene Bareman weighs in on Israel Adesanya facing Alex Oliveira next. According to Izzy’s coach, Adesanya will be the favourite to win against Pereira. Bareman also gave his opinion on the two kickboxing bout between two and thought Israel won the first fight and was winning the second one right until the finish.

At the recently concluded UFC 276, ‘The Last Stylebender’ successfully defended his middleweight title for the fifth time against Jared Cannonier. Although the bout was not particularly exciting, Adesanya still got the job done. On the same night, Alex Pereira also impressed the fans as he brutally knocked out Sean Strickland.

Alex Pereira is back out to watch the #UFC276 main event 👀 pic.twitter.com/iG0zgyXvIg

As reported previously, Alex will now get the opportunity to fight Israel Adesanya next. However, it does not please Eugene Bareman who thinks Pereira is undeserving of a title opportunity. According to Adesanya’s coach, Pereira is just 3 fights into his UFC run. The Kiwi stated that the win over Sean Strickland is not enough for the title shot.

Despite his personal feelings, Eugene Bareman has no complaints about the UFC trying to book Israel Adesanya vs Alex Pereira. As a matter of fact, he is on board with all the promotional elements and the storyline leading into the fight.

He was then asked whether the change in sport will swing the odds towards Adesanya or not. Eugene seemed unbothered about which sport the fight takes place. Breaking down the contest, Eugene said,

“I see what I always see. I see Israel getting a victory over that opponent (Alex Pereira). It’s got nothing to do with that it’s a new sport. I mean I believe Isreal beat him the first time. Like Israel is always harping on about, if you watch the second fight, Israel was beating him handily in the second fight.”

However, Eugene is wary of Alex Pereira’s striking skills. Pereira has a decorated background in kickboxing. He is considered one of the greatest ever to compete in the sport.

The 34-year-old has held titles in 2 different weight classes in kickboxing. He won the Glory Middleweight Championship in 2017 and defended it 5 times. Pereira also became the light heavyweight champ of the promotion in 2021.

Alex ended his kickboxing career with a record of 33 wins and 7 losses. Hence, Eugene is not taking ‘Poatan‘ lightly and is very much aware of the threat he brings to the Octagon against Adesanya. During his interview with Submission Radio, Bareman added,

“I mean it would a hell of a fight, Pereira is a hell of a fighter. He is one of the best in the world at what he does. He’s got a lot of vulnerabilities but he has something that not many fighters have. He has that ability to turn your lights off.”

Who do you think wins between Alex Pereira and Israel Adesanya in the UFC? Can Izzy get his revenge for the previous two losses? Or will Alex Pereira end Adesanya’s 3-year run as the champion and become the new king of the division? Let us know in the comments below.