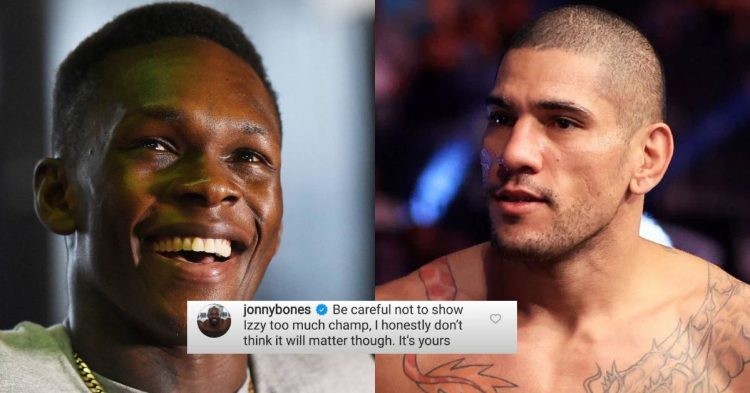 Israel Adesanya finally responds after Jon Jones’ unsolicited advice to Alex Pereira grabbed the attention of fans not more than a month ago. Jon Jones chimed in with a little piece of advice for the “Champion”, reacting to Pereira’s training session with Dominick Reyes.

There was once a point when the UFC world was teased with a match-up between Israel Adesanya and Jon Jones. Years of back and forth and multiple callouts from Jon Jones without any proper response from the Middleweight Champion meant Jones had to move on!

Now, the former light-heavyweight champion awaits his heavyweight debut and is looking to fight Stipe Miocic in his first fight after at the UFC’s 205-pound division.

“Be careful not to show Izzy too much champ, I honestly don’t think it will matter though. It’s yours.” Jon Jones said. Alex Pereira hasn’t shied away from sharing his training footage with his fans ahead of the title fight against Israel Adesanya.

The duo will headline UFC 281 inside Madison Square Garden on November 12 for the UFC’s Middleweight Championship. It’s safe to say whose side Jon Jones is on!

Reacting to Jones’ advice, Adesanya came with a classy response. “I don’t care. If it’s true, he knows why.” Izzy said with a smile on his face.

Several UFC stars including former middleweight champion Robert Whittaker, and MMA great Georges St-Pierre, among others, have credited Israel Adesanya for having a great fight IQ, and rightfully so.

Adesanya’s ability to stick to the game plan is next to none. Moreover, to not lose focus even in moments of chaos, his distance management, striking prowess, takedown defense, and most importantly, his mindset make him a very dangerous fighter. No wonder, he has been able to dominate the UFC’s middleweight division with such ease.

It’s not surprising Jon Jones would advise something like that to Izzy’s rival. The response from Adesanya reflects just that! It’s an exciting match-up between two former rivals from the kickboxing ring, trying to settle their rivalry inside the UFC Octagon on the grandest stage.

Who do you think gets his hands raised at UFC 281? Do let us know in the comments section.