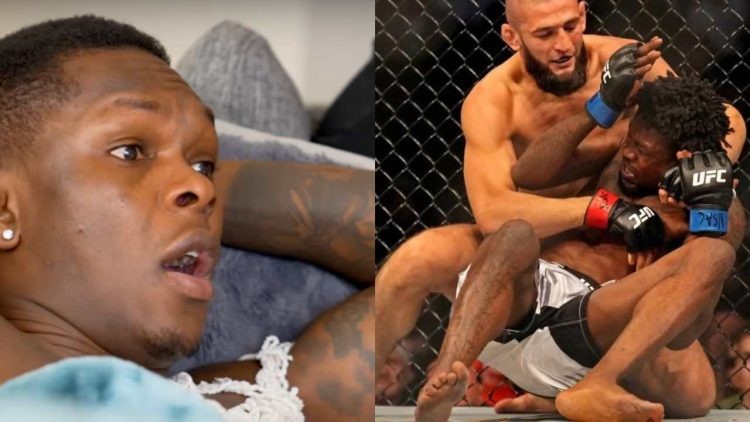 Israel Adesanya has been a dominant champion in the Middleweight division of the UFC. After making his way to the top, Izzy has shown that he is also capable of holding down his spot by taking on any new contender that arises. Currently, Adesanya is sitting pretty with three consecutive title defenses.

In his spare time, Adesanya likes to post videos on YouTube along with his brother David. More specifically, Izzy films his workouts, training camps, and watchalongs for UFC fights.  This week, the Middleweight champ tuned in to watch Khamzat Chimaev fight.

Israel and his brother David Adesanya made bets among themselves as to who they thought would win the fight. With $50,000 on the line, he was unable to cash in his 3 Bitcoin (17,65,237.75 INR). Unfortunately, the parlay was broken after Khamzat ragdolled Kevin Holland around the Octagon.

Although supporting Holland, Israel was mostly quiet and not surprised to see Khamzat dominate. “…Khamzat was just a step ahead, two steps ahead even. But he missed weight so he a b*tch for that.” Clearly, despite his victory, Israel was not impressed with Khamzat’s performance or demeanor throughout the week.

Previously, Adesanya also spoke about Khamzat on a podcast. “His last fight was impressive and I said I might not like you but if I’m impressed by what you do, I’ll give you props. Yeah, he’s a beast but he’s a beast at 170.” With serious contenders to the throne few and far in between, Israel is on the lookout for up-and-coming fighters like Chimaev.

Will Israel Adesanya vs Khamzat Chimaev Happen in the Future?

Khamzat looks untouchable at 170. As such it’s only a matter of time before he gets his shot for the title. Interestingly, Khamzat’s coach Andreas Michael revealed that after capturing the title at 170, they will make the move to middleweight.

Previously, Khamzat Chimaev called Israel Adesanya “easy money.” So the interest in the fight is certainly mutual. However, capturing the 170 title and then making the move up would take some time. Hence, that title shot is most likely to take place in the summer of 2023.

Currently, Israel is faced with his toughest opponent yet in Alex Pereira. It will be Izzy’s toughest challenge yet as Pereira has beaten him twice in kickboxing. Should Izzy beat Pereira, will he give Whittaker a chance at the trilogy or will it be someone else? Only time will tell.