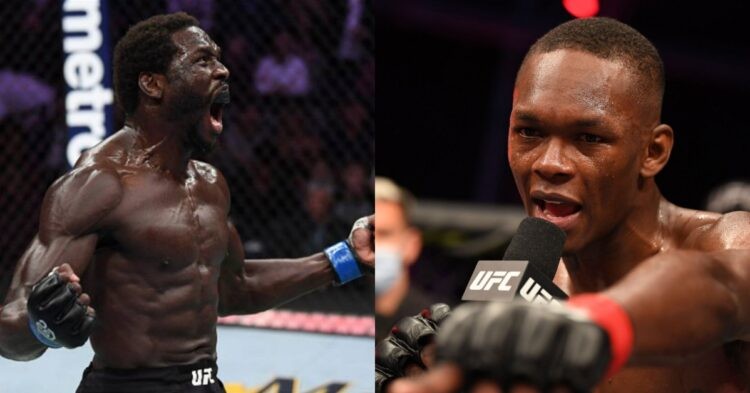 Israel Adesanya vs Jared Cannonier at UFC 276. (Images via Twitter)

UFC Middleweight Champion, Israel Adesanya believes he will beat Jared Cannonier with ease during their upcoming bout on July 2nd.

This year’s UFC international fight weekend card, UFC 276 will feature Israel Adesanya vs Jared Cannonier in the main event. The middleweight champion Israel Adesanya had two back to back rematches against Robert Whittaker and Marvin Vettori at UFC 271 and UFC 263 respectively. Hence, a fight against Jared Cannonier will be a fresh match-up that the fans have not seen before.

But will bring any change to the outcome? As the fans know, Adesanya is undefeated at middleweight and his only loss came against Jan Blachowicz at UFC 259. Izzy went up in weight to fight Blachowicz for the Light-heavyweight title but unfortunately lost via decision.

However, it did not have any effect on his form at 185lbs division. Adesanya has already completed 4 title defences since grabbing the belt in 2019. Izzy has already stated that he plans to gain multiple victories over the middleweight contenders before leaving the division for good.

The Last Stylebender is already deep in his camp for the upcoming fight against Cannonier. Unlike the rest of the division, can Jared Cannonier give Izzy a hard time in the Octagon with his wrestling and power? Or may even possibly beat him? The champ gives his verdict and it is exactly what the fans expect from him. On his Twitter, Izzy wrote,

The only man to beat Israel Adesanya throughout the course of his career is Jan Blachowicz. The former 205lbs champion had the right plan and he executed it impeccably. Whenever Izzy went to throw a punch or blitz forward, Jan level-changed and got a takedown.

Jan was much bigger and stronger than Izzy. Hence it was comparatively easier for the Polish fighter to hold him down on the canvas. But in the middleweight, opponents do not have that advantage. As a result, they are not as successful on the ground against Stylebender. Both Vettori and Whittaker took him down during their respective bouts against Izzy. But the champ got up without spending any significant energy.

THE KING DEFENDS HIS THRONE 👑

🏆 @Stylebender puts the middleweight title on the line against @KillaGorillaMMA at #UFC276! pic.twitter.com/Dz4Lk0Qf57

Hence, the task at hand for Jared Cannonier is not easy by any means. Cannonier is a good wrestler who has a decent amount of power behind his punches. The fans saw Jared hurt Robert Whittaker in the last round during their fight at UFC 254. If the 38-year-old can not take the fight to the ground, an overhand right may just be the best option for the Killa Gorilla.

Israel Adesanya was knocked out once before during his Kickboxing days to Alex Pereira. Hence, there is a chance that Cannonier’s power may give Izzy some problems if it is used at the right moment. Otherwise, the Kiwi fighter will be an overwhelming favourite to extend the number of his championship defence to 5.