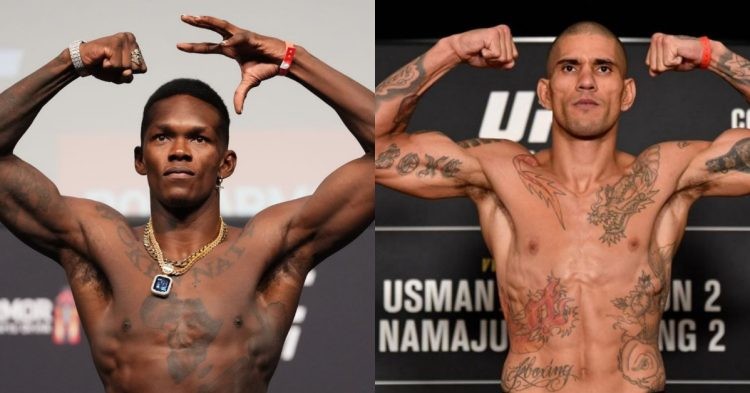 Israel Adesanya vs Alex Pereira next? (Images via Twitter)

UFC Middleweight Champion Israel Adesanya will defend his belt against Jared Cannonier in a month of time. He is set to headline the international fight week card at UFC 276. Although that bout is yet to take place, it seems the champ already has his next title challenger. It is being reported that the winner of Sean Strickland vs Alex Pereira will get the next crack at Izzy’s title.

In the same event where the Stylebender is set to defend his belt, Sean Strickland will fight Alex Pereira. Strickland is joint 4th in the division along with Derek Brunson, whereas Pereira is currently outside the Top 15.

However, the fight is one of the most anticipated regardless of the rankings. Pereira’s inclusion in the UFC came with a lot of hype as he is the one and only fighter to knockout Izzy.

Hence the fans have been fantasizing about these two finally rematching in the UFC Octagon since Alex signed on. However, there were major obstacles that prevented the fight from happening.

Being relatively new to the sport, he needed to get a few wins under the belt in the UFC. The Brazilian has done just that as he has beaten Bruno Silva and Andreas Michailidis back to back in the last 5 months.

Despite the impressive victories, Pereira is yet to beat any ranked or elite fighters in the division. Hence the bout against Sean Strickland is the perfect opportunity for him to announce to the world that he is ready for the next step in his career.

Not only is Strickland a good striker, but he is also an excellent wrestler as well. So the win over him will answer a lot of questions about Alex’s legitimacy in MMA.

Can Alex Pereira beat Israel Adesanya in the UFC?

Alex Pereira and Israel Adesanya have met in the kickboxing ring twice. The first fight ended in a unanimous decision victory for Pereira in 2016. He improved upon it in his next fight as Alex became the only fighter up until that point to attain a clear knockout win over Adesanya.

Since then Israel moved on with his career and currently has a record of 22 wins and 1 loss. He is still unbeaten at middleweight and holds the 185lbs belt in the UFC. If the Kiwi manages to get past Cannonier at UFC 276 and Pereira manages to beat Sean at the same event, they will finally meet in the Octagon.

Unlike Sean Strickland, Izzy will not be a threat to Alex Pereira on the mat. Hence, it will basically turn out to be another kickboxing match in an MMA setting. However, Adesanya has evolved since 2017 and has turned into one of the hardest fighters to hit inside the Octagon. But Pereira will not need much to do damage to Izzy. He already has beaten him twice.

Will the previous losses play on Izzy’s mind if he faces Alex once more? Can Adesanya finally break his losing streak to Pereira? Or his unbeaten streak at middleweight will finally be broken by the Poatan? Let us know your pick in the comments below.