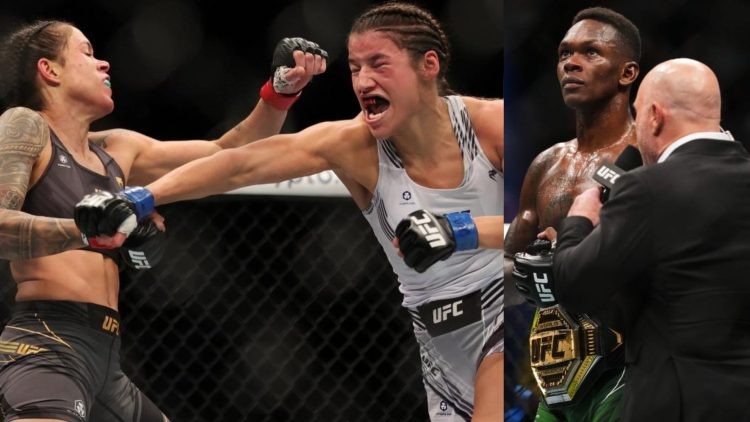 However, Julianna Pena shocked the world submitting Amanda Nunes in the second round. As the fight started, Nunes looked strong with her striking. She even knocked Pena down with a leg kick and secured the top position from the ground. But, taking the fight to ground and trying to submit Pena with a rear naked choke might have been a huge mistake for Nunes.

Julianna Pena defended the choke and attempted a kimura to end the first round. In the second round, both Nunes and Penda decided to trade blows nad the fight turned into a pure boxing match, with Pena getting the better of Nunes.

Even though Julianna Pena beat Amanda Nunes, her boxing skills did not look very impressive. She was throwing her punches with weird angles, which might have worked in her favor.

The UFC middleweight champion, Israel Adesanya talked about the Nunes vs Pena rematch and gave his prediction. Adesanya admitted that he was shocked to see Pena become the champion.

“I did not even expect that. When the fight happened the boxing was, to be honest, rock em sock em. It was unorthodox but it was effective. Amanda knows how to fight, she has done this too many times. She knows how to show up.” – Adesanya on Freestylebender

However, Stylebender predicted Nunes to win the rematch at UFC 277. He believes Amanda Nunes is going to knockout Julianna Pena to regain her title. Even though Adesanya is not counting out Pena he does not seem to be impressed with her boxing from the first fight.

Israel Adesanya went on to make a hilarious impersonation of Julianna Pena’s boxing skills, which made Dan Hooker chuckle.

Julianna has always been tough though, I would not count her out just yet. But, if I was a betting man I go Amanda Nunes. I will go KO as well. I think Julianna might take a beating. I don’t know. Maybe who knows she might give homegirl ptsd from the f****g (Adesanya went on to impersonate Pena). It worked, it was very effective (Adesanya on Pena’s boxing).

UFC 279 featuring Nunes vs Pena 2 as the main event, has one more title fight in the co-main event, where Adesanya’s teammate, Kai Kara France takes on Brandon Moreno for the interim flyweight title.