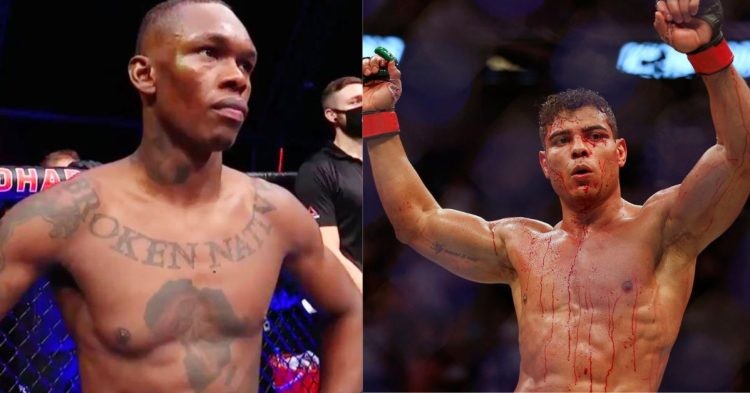 Paulo Costa again trolls Israel Adesanya for his gyno. Being one of the most hilarious guys in UFC, Costa doesn’t miss a chance to roast the middleweight champion. Costa commented on Adesanya’s abnormal gyno ahead of the main event in UFC 281, where Adesanya will be fighting his former rival, Alex Pereira. He trolled The Last Stylebender by commenting ” Gyno is back! fight weeak! ” via Twitter.

The UFC middleweight champion has posted pictures with his fellow teammates Dan Hooker and Carlos Ulberg in the City Kickboxing gym. Advancing to the Pereira fight, a bulked-up Adesanya can be seen with what appears to be a case of Gyno once again. Needless to say, fans are suspicious about the swollen right pec just days away from UFC 281.

Adesanya has been accused of using steroids previously by other middleweights like Sean Strickland who had claimed, “We all know he does steroid”  from Adesanya’s issue with Gynecomastia before the Paulo Costa fight back at UFC 253.

However, the middleweight champion denied the accusation. He said he doesn’t blame the fans for saying he’s on steroids because after a performance like that he’d also think he was on steroids. The Stylebender holds a second-round stoppage win over Paulo Costa.

Adesanya did it with a dominant performance and took home the Performance of the Night bonus.

Is Israel Adesanya really on steroids?

Gynecomastia is the medical name for swelling of the male breast tissue. This can be brought on by a wide range of substances, including alcohol and other intoxicants, prescription pharmaceuticals, and even herbal supplements. The use of anabolic steroids is one of the more common causes of gynecomastia, and following UFC 253, the champion’s critics were keen to raise this charge against him.

Regardless of the accusations, the middleweight champion has never once failed a USADA test. He was awarded the fifty-clean test USADA jacket recently and has even thrown an open challenge to prove he is on steroids.

Adesanya claims that he is the best technical fighter in the UFC and doesn’t need the help of any performance-enhancing drugs to win the fights.

Turning down all the allegations, he has offered to give $3 million to anyone who can find concrete evidence that the middleweight star has been using any kind of steroids or performance-enhancing drugs.