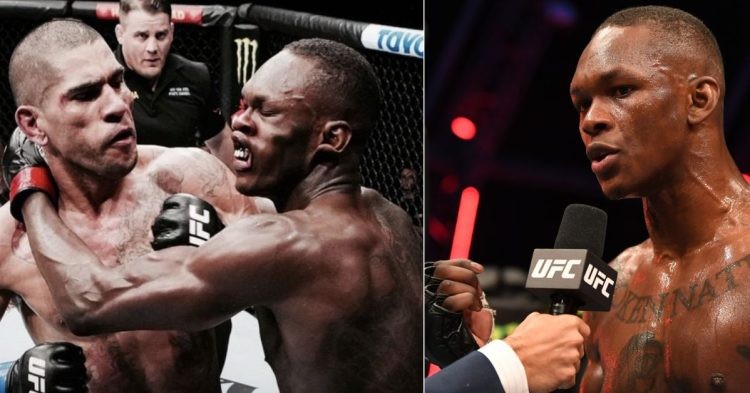 Israel Adesanya’s spectacular reigns as the UFC’s Middleweight Champion came to an end after the Stylebender suffered the first stoppage loss of his mixed martial arts career, dropping a 5th-round TKO loss against Alex Pereira in the UFC 281 headliner inside the iconic Madison Square Garden.

Israel Adesanya handed the loss like a Champion, addressing the audience with his sweet gesture. However, he was not given the opportunity to talk to the audience after UFC seemingly forbade a post-fight Octagon interview for the Stylebender.

In most cases, the losing fighter doesn’t necessarily have the post-fight Octagon interview. However, in this case, it was a title fight, and hence, by all means, Israel Adesanya should have been interviewed. Why was not this the case with Adesanya? Well, it was due to the UFC’s rule of not interviewing fighters after a stoppage loss.

In the past, we have seen post-fight Octagon interviews of fighters after suffering knockout losses. Even at UFC 281, Frankie Edgar was interviewed by Joe Rogan following a vicious KO loss in his retirement fight that saw Edgar drop unconscious on the ground.

While a case can be made it was Edgar’s last fight and he needed to address the audience, one wonders what’s the real reason behind Adesanya not giving an interview despite looking in the best spirits in the aftermath of UFC 281.

Joe Rogan has often been accused of interviewing fighters after they suffer a knockout loss; going against his own and UFC’s rule of not putting the fighters on a spot after a knockout defeat. However, when talking to Frankie Edgar, Rogan was quick to get an acknowledgment from the UFC legend before asking him questions about the fight.

As for Israel Adesanya, he was not interviewed after the fight because he walked away from the Octagon while Alex Pereira’s post-fight Octagon interview was going on. The video of Kamaru Usman checking on Adesanya confirms the same.

Kamaru Usman is one of the first to check on Israel Adesanya 🇳🇬#UFC281 pic.twitter.com/lH6K3DIytu

Be that as it may, Israel Adesanya appeared for a backstage interview and made his thoughts known after the disappointing loss at UFC 281. The stoppage loss against Alex Pereira marks the third time that Adesanya has fallen short against the Brazilian fighter.