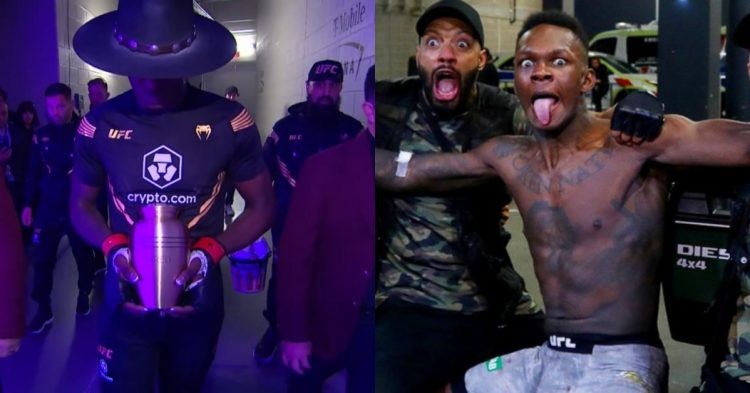 Israel Adesanya is famous for his unique walkouts. (Credit: YouTube)

Israel Adesanya stands out amongst the crowd of UFC champions as a unique character. From painting his nails to dyeing his hair pink, Israel is truly an anomaly in the world of Mixed Martial Arts (MMA). He burst onto the scenes in February 2018, when he beat Rob Wilkinson at UFC 221. He beat Wilkinson via TKO in the second round in Australia.

The Kiwi made a big impression on the fans and made them want to see more of what he has in his tools. He did not disappoint the fans as Adesanya went on to beat fighters like Marvin Vettori, Derek Brunson, Anderson Silva and Kelvin Gastelum. The bout against Silva was an emotional roller-coaster ride for the fans and was a ‘passing of the torch moment.’

What is Israel Adesanya’s most memorable walkout in the UFC?

The Kelvin Gastelum fight was perhaps the most entertaining fight of his career. The interim middleweight title was on the line and Adesanya gave it his all in the bout and came out victorious. What followed, was perhaps the greatest entrance in UFC history. At UFC 243, Adesanya walked out to “Hype 2 Hype” for his maiden title shot against Robert Whittaker.

The event took place in Melbourne, Australia with a sold-out crowd and they were blown away! Adesanya woo-ed the crowd with his amazing dance moves and then proceeded to knock out the hometown fighter in an emphatic fashion to grab the undisputed UFC middleweight title! Although he became the middleweight king that day, the event is more memorable for his incredible walkout!

But it was not the only time Adesanya made a grand entrance. He walked out to Drake’s song “Glow” in his very next bout against Yoel Romero at UFC 248. He had two gorgeous women beside him, laying down flowers for him to walk out on. His next two bouts were against Paulo Costa and Jan Blachowicz at UFC 253 and UFC 259 respectively.

For the Paulo Costa fight, Adesanya chose “Ruggedy Baba” by Ruggedman ft. 9ice and he decided to walk out to “Summer Madness” by Kool & The Gang for the Jan Blachowicz bout. However, he did not go over the top with his entrances as there were no fans in attendance because of the Covid-19 pandemic. But, he returned to form against Marvin Vettori at UFC 263.

For that particular event, he put on a Ghost of Tsushima mask and came out to “Somewhere I Belong” by Linkin Park. It was a stunning visual as The Last Stylebender slowly made his way to the Octagon. His next fight was the rematch against Robert Whittaker at UFC 271. But he did not have a big segment planned for the occasion and kept his walkout simple. Izzy used “Where You Come From” by DJ Khaled ft. Buju Baton.

However, he was perhaps saving his best walkout for UFC 276. After a simple walkout in his previous bout, fans expected Israel Adesanya to go all out and he did not disappoint his fans. Paying homage to WWE legend The Undertaker, Izzy came out to his music, wearing the famous hat and holding the urn in his hand. It left the fans stunned as they dubbed it the best walkout in the UFC, ever!

Which song will Israel Adesanya walk out to at UFC 281?

After walking out like the Undertaker, what will Israel Adesanya do to upstage his antics at UFC 281? As fans know, Israel Adesanya will fight Alex Pereira in the main event of the upcoming PPV at Madison Square Garden. So what song is Adesanya thinking of choosing at the event on November 12th?

In a recent video on his YouTube channel, FREESTYLEBENDER, he gave the fans a teaser for what is to come. Izzy revealed how he chooses his walkout songs and they often represent his outlook on life at that particular point in time.

What iconic horror song do you think the 33-year-old will pick? Let us know in the comments down below.