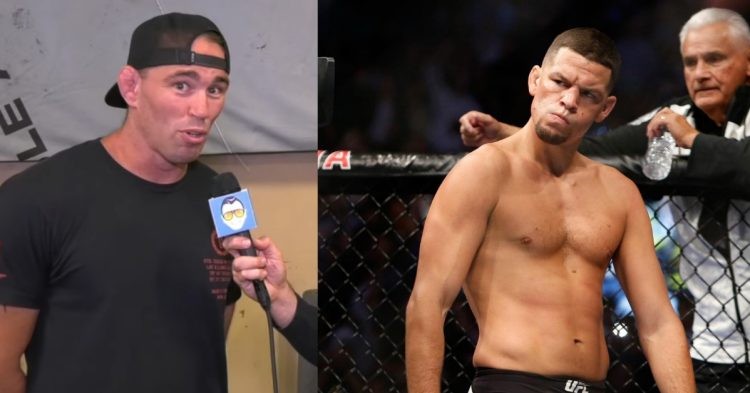 Nate Diaz vs Khamzat Chimaev will headline UFC 279 inside the T-Mobile Arena in Las Vegas. The welterweight clash is potentially going to be Nate’s last bout in the promotion. The 37-year-old was adamant that he will get out of the UFC after fighting Chimaev at the upcoming PPV. However, the door on Diaz staying in the UFC is not completely shut!

In a recent interview with The Schmo, Nate’s teammate Jake Shields stated that Diaz is not completely opposed to staying in the UFC. The former UFC lightweight title contender was always unhappy about the compensation he has received from the UFC over the years. Although his fight purses have increased for his last few bouts, Nate is still not happy.

After his bouts against Conor McGregor at UFC 196 and UFC 202, Nate has developed a massive fan base. He was a favourite for the hardcore fans already, but the McGregor fights made him a mainstream star. His participation automatically increases the PPV buys. Jake pointed it out during his interview and said Nate would like to be compensated accordingly.

“Yeah, of course, there is always a chance of that. You know it all depends on what Dana come him out with him. Nate’s never been against the UFC or said didn’t wanna fight there. He just wants to be paid adequately. Nate has crossed over to an absolute mainstream celebrity. I mean Eminem’s rapping about him.”

“I hang out with Nate a lot. You know, I go, you go to Hollywood and stuff. And celebrities are all trying to come up to his table or take pictures with him. You’re like whoa! Nate’s like, he’s the celebrity that all the celebrities are trying to meet so he has crossed over to that next level of fame, he needs to be paid for it”

Nate Diaz wants to complete his trilogy against Conor McGregor

Jake Shields’ comments support what Nate Diaz recently said about his future as well. The Stockton native does not seem like he is as desperate to get out of the UFC anymore. During an interview, Nate Diaz was asked whether he had any interest in fighting Conor McGregor in the trilogy bout or not.

Although Nate seemed bullish about not wanting to fight Conor in the past, it looks like Nate has softened his stance on it. Nate stated that the timing for the bout to happen was not right. However, he did not rule out the possibility of the bout taking place in the UFC. It certainly made the fans speculate as to what the future really holds for Nate Diaz.

Nate has launched a new fight promotion called, REAL FIGHT INC. He will obviously be busy with it after getting done with Khamzat Chimaev at UFC 279. So it seems like Nate is taking the path that Khabib Nurmagomedov took. Khabib is now a full-time promoter with his company Eagle FC. With Nate’s contract expiring, he may decide to just promote on a full-time basis as well.

So it remains to be seen what Nate does after this Saturday. He can earn big money if he fights Jake Paul. But the UFC will not refuse to re-sign him if Nate wants to stay. The trilogy bout against Conor will definitely do massive business. So very interesting times are ahead for Nate Diaz.