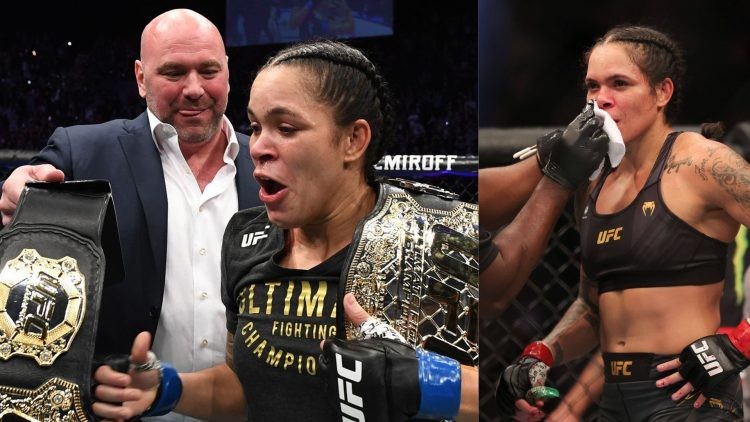 Amanda Nunes has been the undisputed GOAT of women’s MMA for a long time. And that’s a huge achievement. When fans debate about the GOAT in MMA, many names come to the table such as GSP, Jon Jones, Khabib Nurmagomedov, Anderson Silva, and many more.

However, in women’s MMA, many fans will not disagree with the fact that Nunes’ resume and title run are enough to cement her legacy as the GOAT.

But, what happens if Amanda Nunes loses to Julianna Pena again in the rematch? Fans’ perception certainly changed when they witnessed Nunes quit in the second round of her fight against Pena.

Now it should be considered that Amanda Nunes was injured coming into the fight and had a bad training camp. She also possibly had difficulties in her old gym, ATT, which might have had an impact on her performance. But, if Nunes fails to regain her title and prove that Pena’s win over her was a fluke many fans will argue against giving the GOAT title to Nunes.

In a recent interview with Robbie Fox, however, when Dana White was asked about how Nunes’ legacy changes if she loses against Julianna Pena. Dana White stated that even if Nunes loses at UFC 277 she will go down as the GOAt of women’s MMA. White stated:

“It does not change the fact that Amanda Nunes is the GOAT. She will go down as the GOAT. That’s her legacy. Julianna Pena winning the fight on Saturday solidifies with fans, fighters, and media that the first one was not a fluke. And she will be on her own journey and create her own legacy after this.”

Why Amanda Nunes vs Julianna Pena 2 will be a lot different from the first fight?

Fans are certain that a better version of Amanda Nunes will show up at UFC 277 compared to the Nunes who fought Pena in the first fight. However, are the fans overlooking Julianna Pena again?

Julianna Pena will be even more confident in the rematch because she stood toe to toe with the GOAT and made her quit. Pena has a solid chin and she knows if she can survive the early storm from Nunes then the possibility of her winning rises exponentially.

Amanda Nunes looked like the better grappler in the first round but as she got tired Pena got Nunes in an uncomfortable position on the ground. We can see Julianna Pena being more aggressive than in the first fight and taking the fight to Nunes.

While it can not be denied that Nunes will be better in the rematch fans can’t count out Julianna Pena from the rematch.