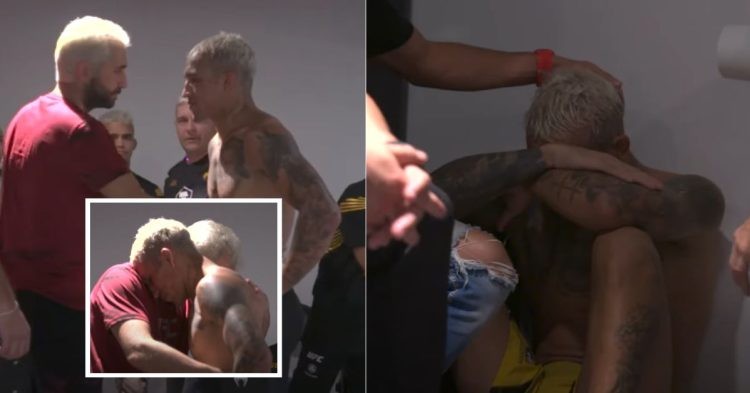 Charles Oliveira in tears after UFC 280

Charles Oliveira suffered the first loss of his mixed martial arts career after an impressive 12-fight winning streak as he succumbed to a second-round submission loss against Islam Makhachev at UFC 280 in Abu Dhabi. A visibly emotional Oliveira requested an immediate rematch in the post-fight interview

“Hey, I promise you. I am gonna get this back!” Oliveira said in the post-fight Octagon interview. “Hey Dana, Hey Hunter, I have never denied a fight, I have always been there for you no matter what. Give me another fight. I need to be the next guy. Give me the chance.” Oliveira added. (Translated)

Emotions were running high as Oliveira contained himself in the aftermath of a disappointing result at UFC 280. And in UFC 280: Thrill and Agony, it becomes all the more apparent.

With his head buried, the sight of Oliveira almost tearing up is not what fans would have expected! After tearing apart the UFC’s lightweight division in less than a year in 2021, having gone past Michael Chandler, Dustin Poirier, and Justin Gaethje in a row of finishes; Oliveira crying for all the wrong reasons is the last thing fans wanted to see.

Charles after losing the belt… pic.twitter.com/bL4JvRlHB0

Who will Charles Oliveira fight after UFC 280? Do Bronx has not given any indication. Reacting to a post on social media that pitted him against Rafael Fiziev for January 22 in Brazil, the former lightweight champion made it clear that he is not fighting in Brazil. “Not gonna happen. I need a break. Thank you guys!” He said.

There are exciting options for Charles Oliveira despite the loss against Makhachev. There are fights for him that make sense both from the rankings standpoint and business standpoint. A rematch with the likes of Chandler, Poirier, and Gaethje is always in the corner, while fresh blood in the form of Beneil Dariush and Rafael Fixiev sounds exciting.

After a disastrous loss like that, it’s safe to say that it will be a while before we see Oliveira back inside the UFC Octagon. Who do you think he will fight when he returns to the cage? Do let us know in the comments section.