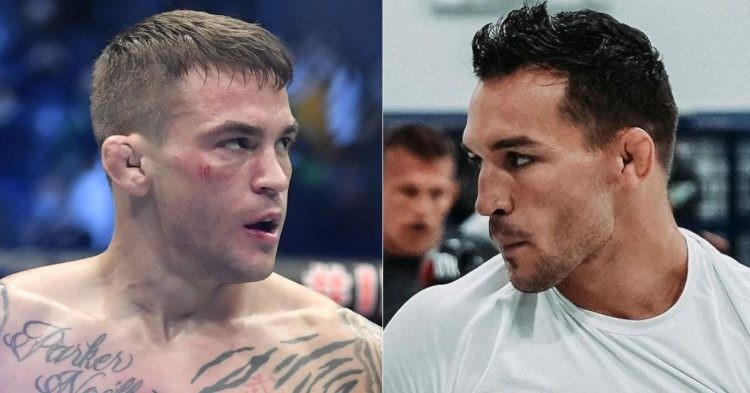 Starting from a heated argument in the stands at UFC 276, to a three-round fight at UFC 281, Poirier and Chandler will look to settle it out inside the cage in New York. Ahead of the fight, Poirier revealed his side of the story and why things aren’t probably right between both the fighters.

“I think it started maybe in Abu Dhabi whenever they asked me about fighting him. And was kind of brushed it off. He took that like I was disrespecting him and then since then, you know, we’re in the same division, we’re on collision course, this is fighting, that’s just what it is.” Poirier said in a conversation with Kevin Iole of Yahoo Sports.

If we look at the history behind this rivalry and how it all started, it has to do with Poirier’s comments after Michael Chandler was named as the backup fighter for Khabib Nurmagomedov vs Justin Gaethje back at UFC 254. Poirier, who was fresh off a five-round war against Dan Hooker, felt like Chandler did not do enough to earn that opportunity. The former Bellator Champion hadn’t even made his UFC debut by then.

After all, Chandler‘s first fight under UFC came several months later at UFC 257. Poirier argued, someone who had been fighting in the UFC deserved that opportunity and it’s not to agree with the former interim lightweight champion.

The rivalry between Dustin Poirier and Michael Chandler

Following Poirier’s comments, Chandler did not have high praise for Poirier whenever he was asked about the fellow UFC lightweight. While their first meeting was cordial, Poirier felt Chandler’s comments painted him in a different picture, so when they came face to face at UFC 276, Diamond did not mince words and called him “fake”.

Some back and forth on Twitter where Poirier claimed that Chandler is “scared” of calling him out, and in less than 10 days, we will see both these fighters step inside the Octagon t bury the hatchet. Who do you think gets his hands raised when it all goes down at UFC 281? Do let us know in the comments section.
Tags: Dustin PoirierMichael ChandlerUFCUFC 281
Previous Post