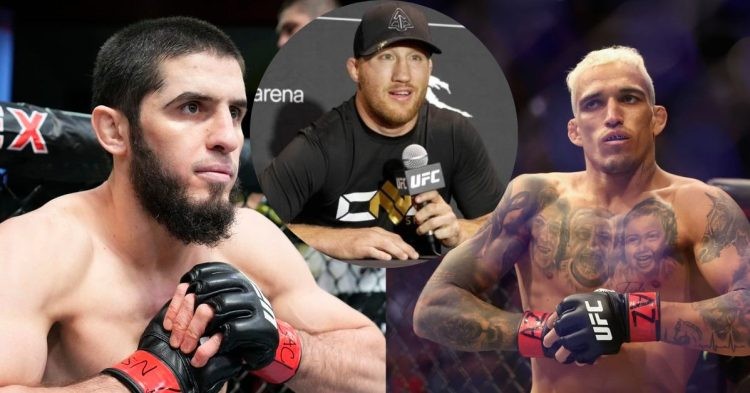 Justin Gaethje and Charles Oliveira faced each other in one of the most epic battles of this year at UFC 274. They locked their horns inside the octagon for the vacant lightweight championship in the main event.

This fight was a guaranteed sellout as it featured two of the best and most violent lightweights in the division. However, the bout played out under unconventional and rather controversial circumstances.

Oliveira missed weight and as a result, he was stripped of the championship, which made the title vacant. However, Gaethje was eligible to win the belt had he won the fight that night.

Justin Gaethje recalled his experience inside the octagon with ‘do Bronx’. He detailed how hard Charles hits which he could not anticipate before going into the fight. While conversing with the media at UFC 278, Justin stated:

“Usually you get hit, call it buzz, call it a flash. This is more like my tongue just went on a super powerful battery and just my entire body- it was crazy. So yeah, it was perfect shots, you know, perfect time. One or the other and yeah. It was the factors that I faced that night”, Justin concluded.

‘The Highlight’ failed to capitalize on his opportunity as he lost via a rear-naked choke submission by Oliveira. But clearly, he had underestimated Oliveira’s power and his skill set.

Justin Gaethje is coming off a loss against Charles Oliveira which was a title shot that he could not stake. And now he has to wait his turn as Oliveira is set to face Islam Makhachev for the vacant lightweight belt at UFC 280.

Ahead of this fight, there have been many speculations and a possibility that Islam is going to dominate Charles in their upcoming fight. Coming off a fight with the former champion, Gaethje offered his thoughts about the upcoming title bout and expressed insights on how this fight might play out. In the same interview, Justin stated:

“Fighting is so exciting. Chance, skill, anything can happen at any moment. And that’s why we are such big fans. So those fights need to play out, you know, I have no idea how they’re gonna go. I’m a 100% confident that Islam will not dominate Charles and that’s about it.”

Justin Gaethje ruled out the chances of Makhachev dominating Charles and pointed out the volatile nature of this sport. Gaethje is now at No. 3 in the lightweight ranking and will look to bounce back from the loss and find his way into the title picture hopefully.