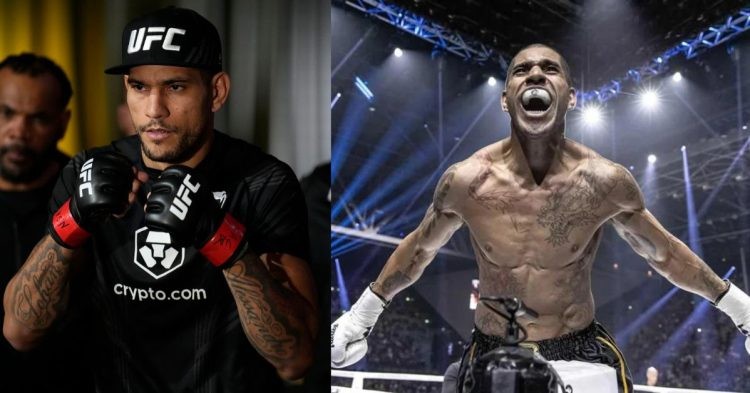 Alex Pereira struggled with alcoholism before he started his fighting career (Credit: Twitter)

Alex Pereira is one of the most vicious fighters in the world and a kickboxing prodigy. The Brazilian is also the only man to ever knockout the UFC Middleweight champion Israel Adesanya. He will once again take on the Stylebender, but this time inside the UFC Octagon for the Middleweight Championship.

Ahead of the title fight, Pereira opened up about the struggles he had to go through while growing up in Sao Paulo. In the video ‘UFC 281 Countdown’, he said: “The place where I grew up was in a rough neighborhood in Sao Paulo. I always worked with my dad as a bricklayer assistant. This was even before being twelve.”

Pereira had financial struggles and he used to support his father as a bricklayer assistant. When he turned twelve, he started working at a repair shop but he became an alcohol addict then. Pereira added:

“Then after I was twelve years old, I got a job at the repair shop. And there I learned to have a not very nice quality of life. It was getting hard, I was drinking more and more and I said, ‘Well I have to stop,’ and then I discovered martial arts, specifically kickboxing.” Pereira said.

According to Pereira, he joined kickboxing to escape his addiction. Once he began training, he found a purpose in his life and fell in love with martial arts. He went on to become a professional kickboxer and later became a multiple-time champion in various kickboxing promotions.

Alex Pereira quit school at the age of twelve and started working at a tire repair shop. However, Pereira soon succumbed to alcoholism as the people working at the shop had an abundance of rum. By the time when Pereira was 16, he was drinking at least one liter of rum along with bottles of beer.

The Brazilian would take payments in the form of pre-paid drinks instead of money when he was working in the shop. He was financially struggling but continued drinking. However, his decision to join combat sports turned his life and helped him give away alcoholism.

Pereira started training kickboxing at the age of 21 and turned pro after a 25-3 (25 knockouts) amateur record. As per some sources, Pereira still struggled with his alcohol problems when during the first four years of his professional career. However, he managed to beat his alcohol urges when he thought about his future.

He amassed an overall pro record of 33-7. He is an eight times Glory kickboxing champion. Other than that, he won the WGP and Pan-American championships. After a successful kickboxing career, he transitioned into MMA and is now set to fight his former kickboxing foe Israel Adesanya, but this time in the UFC octagon.