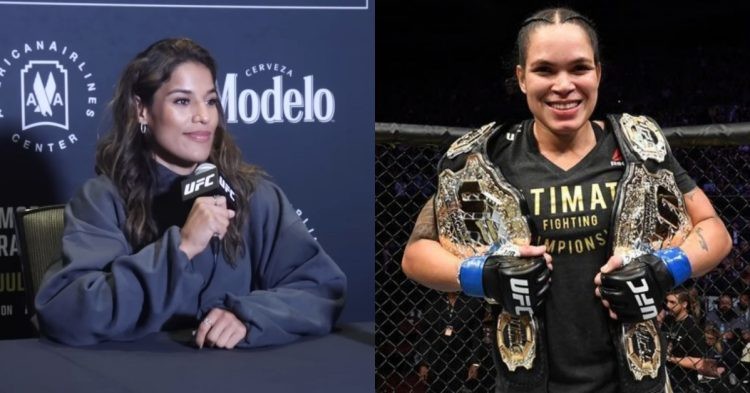 UFC Women’s Bantamweight Champion Julianna Pena is not impressed with Amanda Nunes‘ double champ status. Before losing the belt to Pena, Nunes held both the bantamweight and featherweight titles. However, Pena refuses to see it as an achievement as she claims that the 145lbs division is built around only one person.

Julianna certainly has a point. Amanda Nunes is still the UFC Women’s Featherweight Champion. She won the title against Cris Cyborg at UFC 232. Since then, she has defended the title twice. Once against Felicia Spencer and the other title defence came against Megan Anderson. So it does give the fans an idea about the quality of the division.

But the biggest proof of it is the fact that there is no ranking system in place for the division. For example, Megan got the championship opportunity after only beating Norma Dumont and Zarah Fairn Dos Santos. On the other hand, Felicia got the title shot after just beating Zarah. It proves that there is no depth in the division and it is filled with bloated bantamweight fighters.

Julianna Pena pointed that out in a press conference for UFC 277. She completely dismissed the idea of moving up in weight and trying to grab the featherweight title too.

“There’s nobody in the division, there’s really not. It’s a division of who? Amanda? Who else? All the girls that have fought at 45, just went up in weight so that they could have a shot at the belt because they couldn’t get it done at 145 (lbs) and it’s a division of literally no one. To me, primarily people that either can’t make 135 (lbs) or just don’t wanna cut the weight, you know. The real fights are at 135.”

Is Julianna Pena right about the lack of depth in the women’s featherweight division?

The featherweight division was initially created in 2017 after Cris Cyborg could not make the bantamweight limit. Since then, she defended it three times against Tonya Evinger, Holly Holm and Yana Kunitskaya. Almost all of her opponents competed at bantamweight before or after facing her. So it definitely points out the fact that there aren’t enough credible competitors for the weight class.

Amanda Nunes has inherited the same problem. She is yet to come across anyone in the division who can give her any kind of a credible challenge. But it is not entirely her fault. She has fought to the best of her abilities and has become a dominant champion. UFC President Dana White previously stated that he will keep the division around as long as Amanda wants to fight in it.

What do you think about Julianna Pena’s comments on Amanda Nunes’ 145lbs title? Do you think her criticisms about the division are fair? Or do you think UFC is right to keep the division active till Nunes retires? Let us know your thoughts on the matter in the comments section down below.