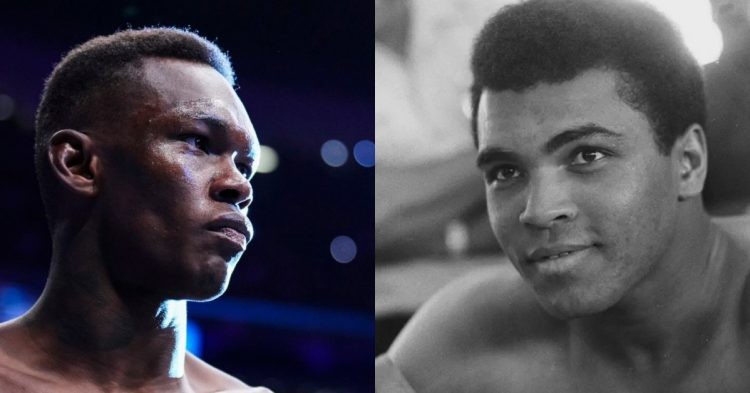 Israel Adesanya suffered the first TKO loss of his MMA career on November 12th. His first MMA loss was against Jan Blachowicz at UFC 259. But it was a unanimous decision loss and many fans thought he won the bout. But Alex Pereira knocked him out in the main event of UFC 281. But, the former champ finds some much-needed support from an unexpected source.

The Last Stylebender posted a beautiful message on his Instagram account about how to deal with a loss. But the source of the message was a surprise for Adesanya himself. He revealed that someone from the great Muhammad Ali’s team sent him a quote from the late boxer himself.

The quote was immediately after Ali suffered his first loss to Joe Frazier in March 1971. Receiving such a message is obviously a special occasion and Adesanya expressed his gratitude.

“The past can be a great teacher.” – Aang. Got this gift from the greatest of all time’s team. The compliments I got from them about dealing with this weekend filled me with pride. Thank you for this gift oh great one. I will always be inspired by your spirit, forever.”

His post has already gained over 300,000 likes on Instagram. Adesanya has lost previously and came back stronger than ever. He lost to Alex Pereira via knockout at kickboxing and went on to become one of the best middleweight fighters in MMA history.

Even during their last bout in the UFC, Adesanya was seconds away from winning the fight via stoppage at the end of round 1. Hence Adesanya will take a lot of encouragement from the performance. It will also give him some confidence heading into another fight against Poatan.

Israel Adesanya initially protested the stoppage from the referee immediately after the fight. Even the fans who tuned in for the bout also claimed that the contest was stopped too early. But Adesanya later backtracked his comments somewhat and revealed that his team thought the stoppage was justified.

But he has no plans of getting back inside the Octagon in a hurry. In the post-fight press conference, Izzy revealed he wants to address some health issues first. Adesanya did not go into the details of his ailments. But he did reveal that there are problems that Adesanya is presently dealing with. Fighters never come into a fight with 100% fitness. So it was not a surprise to hear Adesanya’s revelation.

“People always make fun of me about you know my chest and other things. But they don’t know what I’m doing or what I’m going through in life. But I just keep everything in the back burner. So I just got somethings to fix first, and yeah, I’ll be back”

Adesanya is currently serving an indefinite medical suspension after his bout against Alex Pereira. The last Stylebender hurt his leg during the bout and absorbed some big punches. So it does seem like Adesanya will be out for some significant amount of time. Upon his return, there is every indication that he will fight for the 185lbs title immediately. But can he finally overcome Pereria on his fourth attempt? Only time will tell.