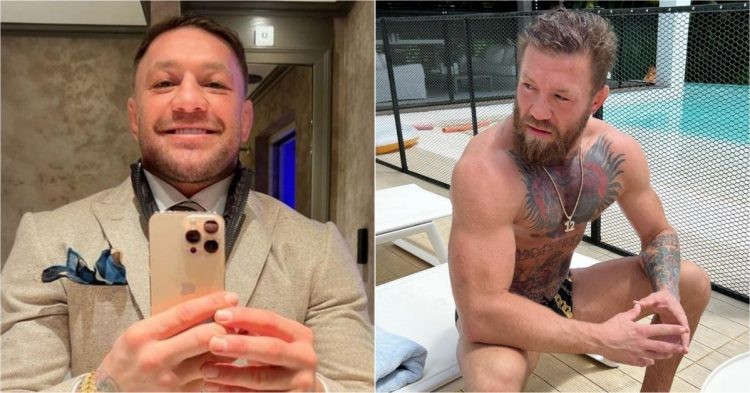 Conor McGregor is the talk of the town once more! While rarely there are days when Conor is not in the headlines, this time it has nothing to do with an upcoming bout or lawsuit. The Notorious one is very active on his social media account. From getting into arguments to posting pictures, Conor does not miss any opportunity for fan interaction.

However, it also brings a certain level of attention to all his virtual activities. Recently, some fans went through the tweets that Conor liked, and found some homoerotic content. Naturally, it brought on speculation about the Irishman’s sexuality. While some fans joked around about the incident, the speculation does have some merit to it.

Conor has been in a relationship with Dee Devlin for over 10 years now. They also have three children together. In 2022, Conor accidentally posted a video of him engaging in sexual acts with Dee.

So it does give some indication of McGregor’s sexuality. However, this is not the first time when someone has questioned his sexuality. Back in 2018, his sparring partner turned rival Paulie Malignaggi also brought up the issue.

Paulie Malignaggi claims Conor McGregor “came on” to him

Back in 2017, Conor McGregor fought Floyd Mayweather in the second-best-selling boxing PPV in history. For that fight, Conor McGregor had to spar with former boxing world champ Paulie Malignaggi. Conor has always claimed that he got the best of Paulie in the sparring session. It ultimately led to UFC President Dana White greenlighting the bout between Conor and Floyd.

However, Malignaggi has always disputed it. Time and time again, Paulie stated that it was he who gave Conor a run for his money. But that was not the only thing Paulie had on his mind. In light of Conor’s recent Twitter activity, fans on Reddit made a reference to a 2018 interview that Malignaggi did with Behind The Gloves. In it, Paulie claimed that McGregor had “a thing” for him.

He added, “This is not homophobic or anything but I’m starting to feel like it’s a weird gay thing. As a man I have my rights and I don’t like another man coming on to me like that… I don’t go that way and I have the right to be a straight man if I want to be. I don’t feel like I want to go that way but I feel like he wants me on his mind.” (h/t via Sports Joe)

However, it is very important to note that Conor and Paulie are rivals. The latter even wanted to fight Conor in a boxing ring. So the comments may be a tactic for Paulie to provoke McGregor into accepting a fight against him. So Paulie’s comments are mere speculation.

Fans online also floated the theory that Conor’s account could have been hacked. Earlier, UFC fighter Katlyn Chookagian also faced a similar issue, where her account was allegedly hacked. It led to her account liking some NSFW videos on Twitter. So it will be interesting to see what Conor says about the incident in the near future.