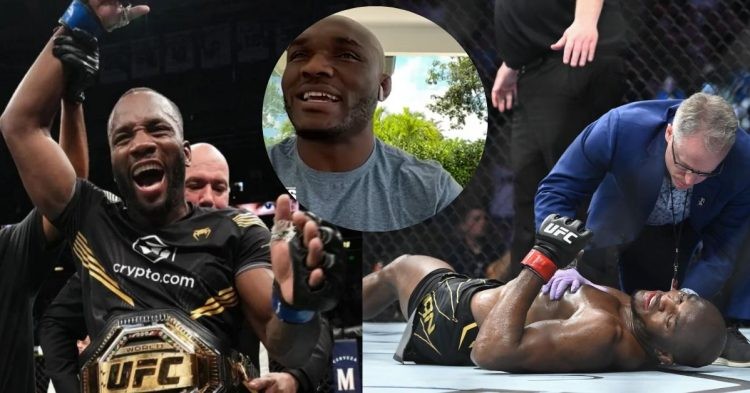 Kamaru Usman talks about his KO loss against Leon Edwards

Former UFC welterweight kingpin Kamaru Usman is taking his first ever UFC loss positively. Kamaru lost his 15-win streak and the welterweight belt to Leon Edwards in the main event of UFC 278.

Recently in an interview with TMZ Sports, Usman said that he is “feeling great” after the fight. He praised Leon for the surprising setup kick and stated that he is looking forward to their trilogy fight in the future.

“Everything is great,” Usman said describing his state after the loss.

When asked about his next fight, Usman stated that he would like the UFC to book their trilogy fight in England for next year. The former champ also said that the only fight that makes sense for him now is his third outing with Leon Edwards. He said:

The former pound-for-pound No.1 also stated that he will talk to UFC President Dana White to look for a possible date for this trilogy fight with Edwards.

“The Nigerian Nightmare” had to taste his first UFC loss with just one minute left in their 5-round bout on Saturday. In one of the biggest upsets in the sport’s history, Usman was caught with a left head kick that rendered him unconscious.

Usman thinks that his friends and family are more upset about the outcome than himself. Kamaru is handling the situation pretty well despite losing his throne. The former champ also expressed his gratitude to his family and fans for supporting him.

After a huge success in the UFC 278, UFC president Dana White expects to book a trilogy fight between Leon Edwards and Kamaru Usman in the biggest arena in London next.

Despite Usman losing the belt, White claimed that he ‘fought a perfect fight’. White remarked that Edwards’ last-minute knockout was another proof of the unpredictable nature of this sport.

In the post-fight press conference, White stated that he wants their trilogy fight to take place at England’s biggest arena, Wembley Stadium.

The fight fans have seen two huge UFC Fight Night events at the O2 Arena but the UFC has never hosted a stadium event on Edwards’ home soil before. It is something that the new champ will also be very keen to see happen.

But before that, Usman will likely have to go through a medical recovery period before returning to action. UFC President has also stated that there should be no rush and the trilogy will most likely happen in 2023 as all the upcoming events are already booked.