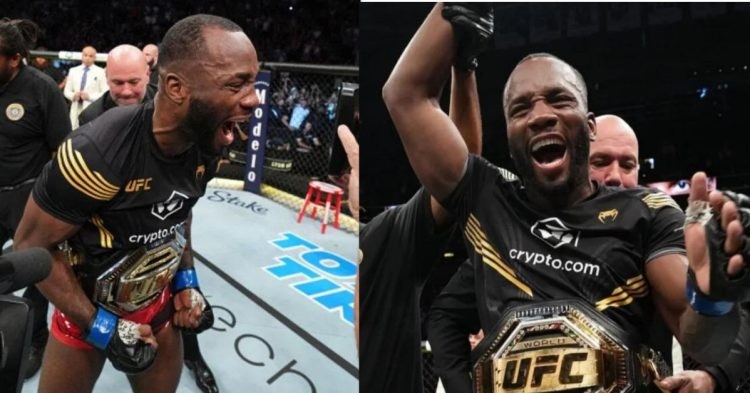 Leon Edwards just shocked the world with a highlight-reel kick that rendered Kamaru Usman unconscious at the main event of UFC 278. He is the first-ever Jamaican-born British fighter to win a UFC title.

‘Rocky’ was seen getting very emotional when he was crowned the new welterweight champion. The new champ was ecstatic when he finally dethroned the former pound-for-pound No.1 and no one was more proud than Leon’s mother.

In Leon’s first interview with Ariel Helwani, he detailed winning the belt and what it meant for him to make his mother proud. Leon said:

“When your mum cries, it makes you cry as well you know. There’s all in the house like my mum, and my son, all watching the fight together…”

Talking about his mother, he broke down in tears and was visibly very emotional. He continued:

“It’s difficult for me to see my mum in tears. She got me involved in MMA at the age of 17 just to keep me out of trouble and I made her proud and I…”

‘Rocky’ was overwhelmed with joy and emotions as the magnitude of the victory was very clear to everyone. Leon had waited 7 years since his defeat to Usman back in 2015, and it’s quite understandable why it was an emotional victory for the new champ.

Leon Edwards was behind on points in the fight. However, just when everyone thought Usman will continue his reign as the undefeated kingpin, Edwards timed a perfect head kick to shock the whole crowd and drop Usman on the canvas.

The fight fans attending the event were on their feet and Edwards was visibly emotional in the post-fight interview and immediately paid tribute to his mother.

Talking with Joe Rogan, he said: “I was born in Jamaica with nothing. I lived in a wooden shed with a zinc roof. Look at me now!”

“All week I felt like this is my moment, everything in the past, the two years, the pandemic, look at me now, I’m champion of the world.”

Leon concluded by thanking the UFC and the President, Dana White.

“Thank you Dana and to the UFC for giving an opportunity to a kid who was born with nothing, thank you.”

The joy and the emotions in Edwards showed clearly in a video captured by the UFC that saw Edwards FaceTiming his family while walking backstage. He yells at the camera: “I told you, mum, I told you I’d do it!”

His family is very happy on the other end as they scream and cry for joy. It was a very emotional moment. Edwards’ stunning KO will go down as one of the greatest finishes in UFC history as he ended Usman’s 15-fight unbeaten win streak and caused his first-ever loss in the company.